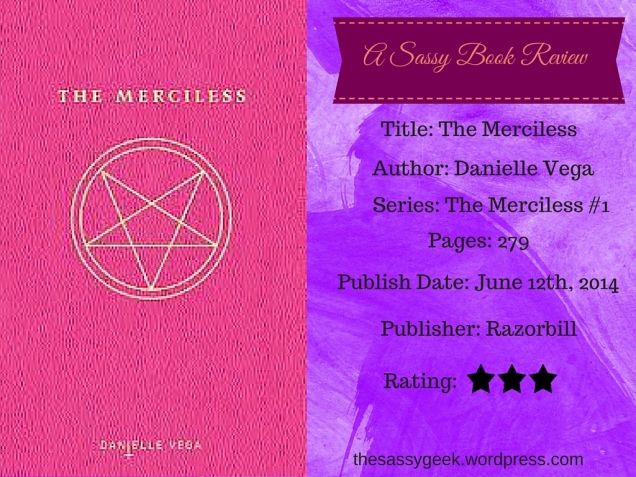 Brooklyn Stevens sits in a pool of her own blood, tied up and gagged. No one outside of these dank basement walls knows she’s here. No one can hear her scream.
Sofia Flores knows she shouldn’t have gotten involved. When she befriended Riley, Grace, and Alexis on her first day at school, she admired them, with their perfect hair and their good-girl ways. They said they wanted to save Brooklyn. They wanted to help her. Sofia didn’t realize they believed Brooklyn was possessed.
Now, Riley and the girls are performing an exorcism on Brooklyn—but their idea of an exorcism is closer to torture than salvation. All Sofia wants is to get out of this house. But there is no way out. Sofia can’t go against the other girls . . . unless she wants to be next. .

“Forgive us, Father, for we have sinned”

First off I’d like to say that for this book I committed one of the ultimate book sins. I judged a book by it’s cover. I was strolling through Barnes & Noble when I saw this bad boy on one of the shelves, and I knew I had to have it regardless of what it was even about. I know, it’s bad. But look at it….it’s so awesome. I mean a hot pink cover with a pentagram on it, and that’s basically it? It was so enticing. So I read the little description and I was kind of put off by the whole “mean girl” vibe I was getting from it but I still had to have the book anyways.

Now before I really start with the review let me just say this book is Mean Girls with a lot more gore and scary shit. You’ll see a lot of other reviews that state the same thing. I personally love all of these being a combination but if you didn’t enjoy Mean Girls or you want your horror books without the girl drama then “The Merciless” might not be for you.

I have a lot of mixed feelings about “The Merciless” I’m going to try my best to express both sides of what I hated and liked about it.

The characters weren’t all that interesting and I didn’t feel attached to them whatsoever, there wasn’t any depth to them I felt. The could all have been built up so much MORE, this book is very character driven and they just weren’t doing it for me, if they had been I feel the book would’ve been a lot scarier than it ended up being. There just wasn’t any character development. We basically had a bunch of high school girl cliches running around freaking out and starting cat fights the whole book. That’s basically all they did.

The plot was pretty creepy and twisted at points though, there’s definitely a lot of gore and a few (very few) scary scenes that made it worth the read for me. I could have done with out a lot of the high school drama but that was what drove the plot so I can forgive it. Also there’s a pretty good plot twist towards the end of the book that was pretty mind blowing and disturbing, I loved it. And even if you’re like me and love more of the horror and gore aspect of the book then you will LOVE the ending, I promise.

(Sorry I like to use a lot of Supernatural gifs……)

The writing was simple enough to understand but very….underwhelming. Danielle Vega underwrote this book. She could have taken the suspense and the characters and the plot to a whole other level if she hadn’t concentrated so hard on writing in the girl drama and cheap scares. Don’t get me wrong there were some very gory and creeptastic scenes but it wasn’t SCARY enough. Vega could have written more about the true evil of human nature or something like that, I mean the whole book is about a group of girls torturing another girl because she’s different. But nope. Vega went for supernatural horror, which I do love, and she did a decent job with it. I just felt a little robbed.

In short, I hated the book for it’s girl drama and unimpressive writing, but I loved it for the gore and for the few truly sinister plot pieces.

So in the end I did kind of enjoy the book, although there were many issues with it. I don’t recommend this book for the younger teenage group since parts of “The Merciless” get pretty graphic. I do recommend this read for people who like YA Horror, that is if you aren’t put off by the Mean Girls-esque style of it or anyone who doesn’t mind a shallow plot and shallow characters.

7 thoughts on “Mini Book Review: The Merciless by Danielle Vega”