Two decades have passed since an inferno swept through Elmbridge High, claiming the lives of three teenagers and causing one student, Carly Johnson, to disappear. The main suspect: Kaitlyn, “the girl of nowhere.”

Kaitlyn’s diary, discovered in the ruins of Elmbridge High, reveals the thoughts of a disturbed mind. Its charred pages tell a sinister version of events that took place that tragic night, and the girl of nowhere is caught in the center of it all. But many claim Kaitlyn doesn’t exist, and in a way, she doesn’t – because she is the alter ego of Carly Johnson.

Carly gets the day. Kaitlyn has the night. It’s during the night that a mystery surrounding the Dead House unravels and a dark, twisted magic ruins the lives of each student that dares touch it.

Wow this book is so twisted and messed up I’m not sure my brain has recovered enough to properly rate it and write this review. Therefore it may be shorter than I’d like, but I may update it more later with more thoughts.

This is and isn’t YA Horror, it’s creepy but not really scary enough for me to feel like it’s good enough to compare to others I’ve read in this genre. It feels a lot more reminiscent to the style of Gillian Flynn, where it leaves you feeling like you need to go take a shower and watch a Disney movie to make yourself feel happy again.

Probably the best part of the book for me because it makes you question EVERYTHING! You can’t trust any information you’re given, not even the tiniest piece. You also can’t trust any of the characters. Everything is very psychological in “The Dead House” so I REALLY mean it when I say you can’t trust anything you’re told.

While reading you’re going to be thinking mainly about two questions:

So as I said already the book is very psychological but also it’s paranormal. Add those together and the result you get is a very unsettling and disturbing story.

The ending is also very open, it’s up to YOU to decide what you think really happened. Was Kaitlyn mentally ill or possessed/haunted? So if you’re looking for a book that gives you straight answers then this isn’t for you.

Also the format of the book makes it really interesting to read through, it’s written as a police report including Kaitlyn’s diary entries, newspaper clippings, transcripts for video clips and interviews. 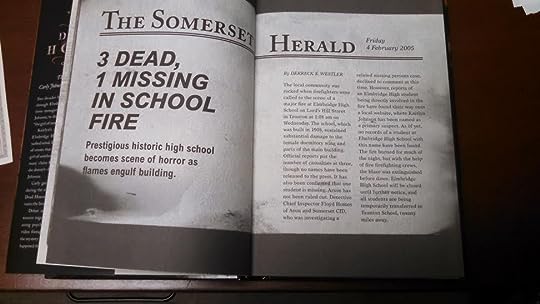 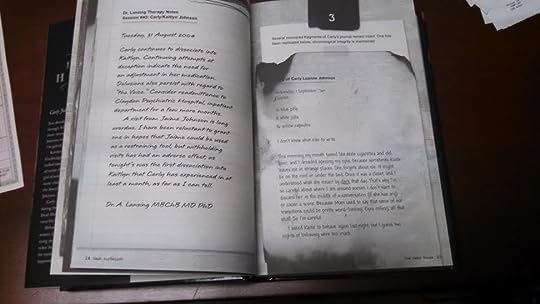 Cool, right? It also makes for some pretty easy reading.

On another note, I love the cover. If you take the jacket off you even get ANOTHER awesome cover! It’s like my dream come true, if you want to impress me then you’ll put a cover underneath the jacket cover. Like so: 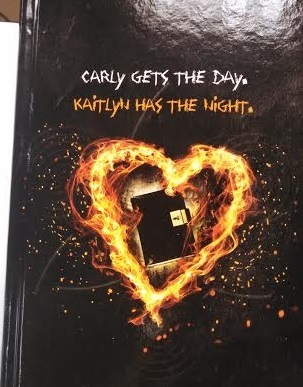 Both covers fit the themes of the book very well too. Bonus points.

I did not enjoy any of them, the only one even remotely interesting is the MC Carly/Kaitlyn that’s it. Every other character was boring, flat, and uninteresting. I feel like they were all just added to the story to do things to set plot points into motion. I felt that there was no character depth or complexity, with the exception of Carly/Kaitlyn as I said earlier.

Carly/Kaitlyn seemed to get more…foolish as the story progressed though, and no I do not mean because of her potential “mental health” issues. She’s potentially losing her mind or being manipulated by supernatural forces but that’s no excuse to lose all common sense. What I mean is if someone tells you don’t trust anyone especially your friends then I don’t know…..maybe you should LISTEN and not trust anyone!

And the romance, I’m cringing. What romance there was, was barely present throughout the entire book but it was so lifeless and unexciting. I could have done without it entirely. Seriously I think Bella and Edward had a better romance than any of the characters in this story. It’s somewhat important to the plot (unfortunately) so I must (grudgingly) accept it.

16 thoughts on “Book Review: The Dead House by Dawn Kurtagich”