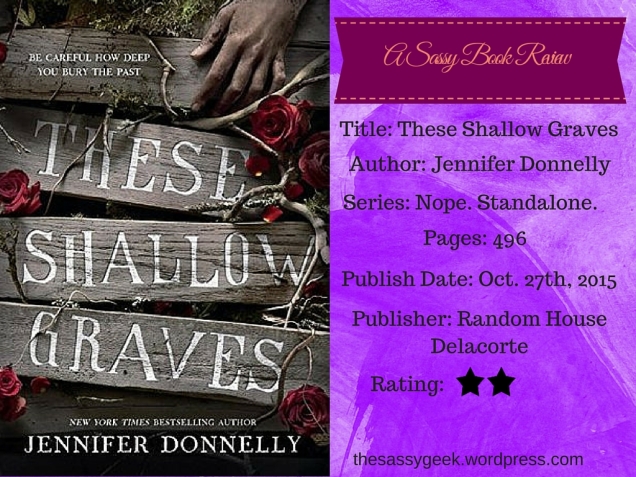 Jo Montfort is beautiful and rich, and soon—like all the girls in her class—she’ll graduate from finishing school and be married off to a wealthy bachelor. Which is the last thing she wants. Jo secretly dreams of becoming a writer—a newspaper reporter like the trailblazing Nellie Bly.

Wild aspirations aside, Jo’s life seems perfect until tragedy strikes: her father is found dead. Charles Montfort accidentally shot himself while cleaning his revolver. One of New York City’s wealthiest men, he owned a newspaper and was partner in a massive shipping firm, and Jo knows he was far too smart to clean a loaded gun.

The more Jo uncovers about her father’s death, the more her suspicions grow. There are too many secrets. And they all seem to be buried in plain sight. Then she meets Eddie—a young, brash, infuriatingly handsome reporter at her father’s newspaper—and it becomes all too clear how much she stands to lose if she keeps searching for the truth. Only now it might be too late to stop.

The past never stays buried forever. Life is dirtier than Jo Montfort could ever have imagined, and the truth is the dirtiest part of all.

“If you’re going to bury the past, bury it deep, girl. Shallow graves always give up their dead.”

Let me start off by saying that this is NOT a bad book by any means, it’s actually quite good but definitely not my cup of tea. My relationship with “These Shallow Graves” has a serious case of “it’s not you, it’s me”.  My low opinion on this book seems to be in the minority, it’s an unpopular opinion. Most people LOVED this book, it’s just not for me.

First off this book is WAY too long for its content, seriously, it’s probably my biggest complaint about the whole thing! There is no way this thing needed to be 500 pages, the plot was majorly stretched out to make it fit. I could rant and rave all day about how unnecessarily long this book is!

When you make a plot longer than it should be it starts to get very repetitive, I felt like Jo was saying and doing the same thing for half the book. Sneaking out, doing things she shouldn’t, and sneaking back in. Over and over and over and over. And for what? An inch of progress in her mystery, that’s what.

Secondly, a mystery is pretty hard to get into if you can guess over half of the twists and reveals chapters before they happen. For some people you might read this and not see it coming and for some other people you might be like me and see most of it coming. Everyone’s different and I respect that. For me though personally, I didn’t think the mystery was all that mysterious.

Reading a 500 page book is pretty damn hard when you guess “whodunnit” within the first several chapters. Did I have proof? No. Did I strongly suspect throughout the entire, excruciating length of the book? Yes.

I didn’t guess every single twist though, therefore keeping it at least somewhat entertaining.

Another thing, the pacing got on the slow side. When I said the story gets repetitive I meant it and thus makes the plot drag on in some parts.

As mentioned earlier, I also found the cover and even the title of this book to be pretty misleading. I makes it look like a very creepy or dark book which it’s not. It’s the polar opposite. There wasn’t a single creepy or scary thing that happened in this story at all, sure there were scenes where you were WORRIED about the characters but never creeped out or honestly scared. Disappointing. We’ve all heard “don’t judge a book by its cover” and with this one it rings more true than usual.

Now on to more positive comments!

I really liked the overall setting of the book, 1890’s New York City is pretty exciting. It was very well executed and Donnelly definitely did her homework on this one.

Everything had a very authentic feel to it, the slang, the language, and the items and places. You have carriages, corsets, newsboys, brothels, and newspapers galore. I loved it and it’s probably my most loved aspect of the entire book. It also showed a lot of the nitty, gritty about poverty as well. Kind of depressing but like I said: authentic.

I also really enjoyed the ending, I didn’t really expect to at all but I was pleasantly surprised. It ended well and with Jo doing what she wants and it did not involve around the romance whatsoever. I loved that the most, I was DREADING some sort of running off into the sunset with the love interest. It’s an ending that I think will please every reader.

Josephine Montfort is our main character, and I have a ton of mixed feelings about her. On one hand I thought she was clueless and kind of annoying, on the other I really liked her strong will and caring personality.

Yes, I understand that her being an upper class girl she wasn’t taught or exposed to certain things. But I thought she was more clueless than normal. If you’re going to go traipsing around New York City at night then you should know some things.

I was on page 110 and it was the 4th time she’d been referred to as a prostitute, at least. Now I don’t like that everyone assumes that just because she’s walking around town at night, but what I really didn’t like was how Jo had zero idea they thought she was a prostitute. Come on, girl! You can’t be that naive!

Then Eddie Gallagher is our other main character and the love interest. Honestly I don’t even really have much to say about him at all. He’s a pretty meh character, to me. Not all that interesting and especially not swoon-worthy.

Actually though my favorite characters were the secondary ones such as Oscar and Fay. I kind of liked them more than Jo or Eddie. Oscar was hilarious and Fay was a badass. They had a lot more personality and were just more likable for me.

I’m pretty sure you all know by now that I am not a romance fan, at all. It takes a lot to thaw this cold heart of mine and after reading 500 pages you would think it would have. Sadly, not the case.

The insta-love is there but not overwhelming and there is no love triangle so I suppose I’ll settle for that.

One major thing I didn’t like about Jo’s romance was how easily swayed she was. She’d see or hear something and instantly it was, “OH NO HOW COULD I HAVE EVER LOVED HIM WHEN HE HAS USED ME SO?”.

It was the most annoying thing ever. I couldn’t help but roll my eyes, because she’d take him back and then think he betrayed her AGAIN and decide she was through with him and take him back AGAIN.

The romance was a little too….fluffy for me.

I said it once already and I’ll say it again, it was me and not the book. I just didn’t like it. I had a lot of my own issues with it. I really don’t have any interest in reading anything like “These Shallow Graves” again or really even reading anything else by Jennifer Donnelly. Lots of other people loved this one, I’m just not one of them.

10 thoughts on “Book Review: These Shallow Graves by Jennifer Donnelly”