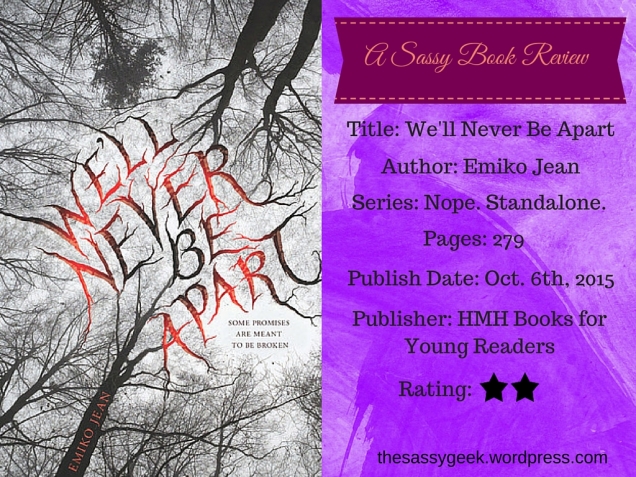 That’s all seventeen-year-old Alice Monroe thinks about. Committed to a mental ward at Savage Isle, Alice is haunted by memories of the fire that killed her boyfriend, Jason. A blaze her twin sister Cellie set. But when Chase, a mysterious, charismatic patient, agrees to help her seek vengeance, Alice begins to rethink everything. Writing out the story of her troubled past in a journal, she must confront hidden truths.

Is the one person she trusts only telling her half the story? Nothing is as it seems in this edge-of-your-seat psychological thriller from the debut author Emiko Jean.

Alright, so mystery/thrillers are pretty much the only contemporary books I read and I have read more than a few of them, I think because of this I didn’t enjoy “We’ll Never Be Apart” as much as I could have. This is a psychological thriller that relies very heavily on its plot twist for it to be any good. I saw this twist coming a mile away and honestly knew it was coming throughout the entire book but I kept reading in the hopes that I would be proven wrong. I was not, in fact, proven wrong at all.

The pacing throughout the story is very slow and it just feels like the whole book is a build up for the “big reveal” at the end. There’s no action and basically no real story going on until the end of the book. There is quite a bit of backstory and flashbacks but even with all of that the story is still very flat and uneventful.

There are also plot holes that grow pretty tiresome, such as the fact that the main characters Alice and Chase are in a mental hospital and still manage to run around constantly without any problems. Not that I have any experience with mental hospitals but I’m preeeetty sure they’re stricter and more in control than this.

Also on a little side note here this book contains animal cruelty! If you’re like me and can’t stand this then I would skip “We’ll Never Be Apart”. While I know this bit was done to show the wavering mental stability of a character and while it doesn’t play a major role in the book, I felt that it was still completely unnecessary.

Apart from the slow and predictable storyline the characters were very lacking as well. None of them were interesting, relateable, or developed. Considering the fact that this book is psychological, well developed characters are kind of a necessity. However, they all just felt very shallow and VERY unmemorable.

I did like Emiko Jean’s writing though and it was enough to round this book up to a 2 star rating since the book wasn’t an absolute mess either. Since this is her debut novel I think she shows a lot of potential and I will consider checking out her future works.

Overall “We’ll Never Be Apart” isn’t very original, surprising, or shocking and this twist has been done so many times before it’s nothing new. However, if you haven’t read many psychological thrillers you might actually end up enjoying this book!