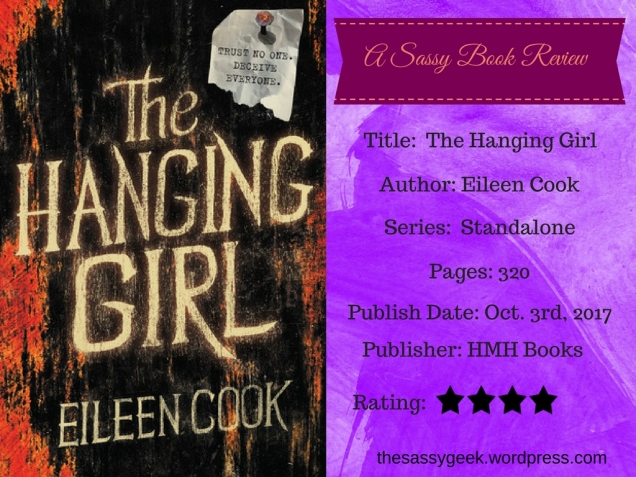 Skye Thorn has given tarot card readings for years, and now her psychic visions are helping the police find the town’s missing golden girl. It’s no challenge—her readings have always been faked, but this time she has some insider knowledge. The kidnapping was supposed to be easy—no one would get hurt and she’d get the money she needs to start a new life. But a seemingly harmless prank has turned dark, and Skye realizes the people she’s involved with are willing to kill to get what they want and she must discover their true identity before it’s too late.

**** Huge thank you to Houghton Mifflin Harcourt for sending me an ARC in exchange for an honest review! ****

After reading and enjoying Cook’s other novel “With Malice” I knew I was going to be in for a treat with “The Hanging Girl” and it definitely did not let me down! I can’t go into too much detail because I really don’t want to ruin anything but it really is a thrilling, fast-paced book!

The focus of the story is the main character, Skye, who fakes being a psychic and is enlisted to help the police find a missing girl. She has some inside information on the kidnapping though in exchange for getting money she desperately needs, but things don’t exactly go as planned. That’s all I’m going to tell you!

This is a pretty fast paced book with never a dull moment and also one that will grab your attention immediately. Our protagonist, Skye, is shown as a liar and manipulator right off the bat and therefore a bit of an unreliable narrator, which is always intriguing to me. There are quite a few plot twists throughout the story and I didn’t see hardly any of them coming at all! I also thought it was great that major plot twists occur in the story pretty early on too, definitely keeps things interesting! If you’re already a suspicious reader, like myself, you may guess a few things but I think it’s safe to say you’ll still get surprised.

The psychic portions of the story were also really interesting and perfect for Halloween if you’re looking for a great, non-spooky thriller to read!

I was a little disappointed with the ending, I just felt it wasn’t as shocking as a lot of the other twists were and it was slightly more predictable. I felt like it was abrupt and unfinished, it wasn’t a BAD ending by any means but it left me a little unsatisfied.

I’d also like to mention that the protagonist, Skye,  has anxiety and having anxiety myself I thought it was represented well. She is constantly dealing with the threat of a panic attack throughout the story, and considering the situations it’s not surprising for someone with anxiety. I thought the way the anxiety was described was also fairly accurate such as Skye picking at the skin on her fingertips or biting her nails, that’s something I do because of my anxiety as well and it was extremely relatable.

There really isn’t much to discuss as far as characters go, there’s Skye and as I already mentioned she’s manipulative, a bit unreliable, and also suffers from anxiety. I did really like her character though because she’s doing things for a good reason and found her to be very relatable.

As far as secondary characters go they are there to drive the plot and not much else. The only other moderately interesting character’s would be Skye’s mom, her best friend Drew, and another character whose name I won’t mention due to spoilers but they were……interesting.

One of the best parts about this book is that there is no romance to distract from all the plot twists and thrills!

Overall this was a fun, quick read!

I recommend checking this one out especially for Halloween coming up or if you just enjoy a really good, fast-paced thriller! 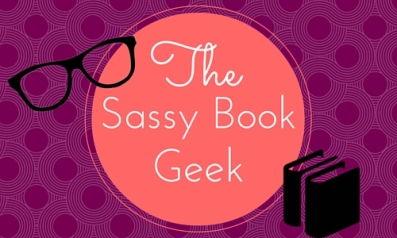 15 thoughts on “ARC Review: The Hanging Girl by Eileen Cook”