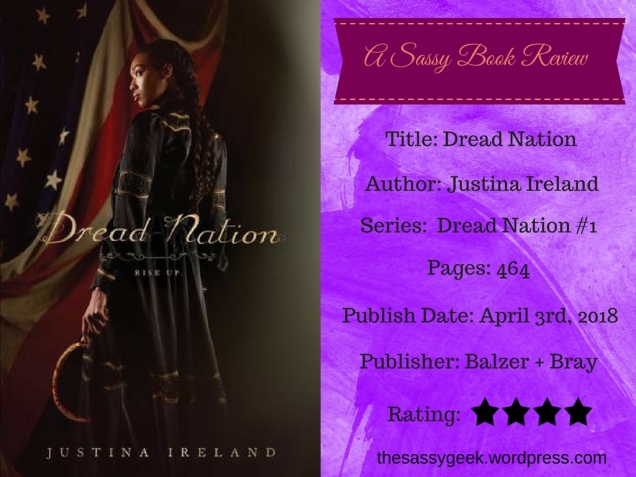 Jane McKeene was born two days before the dead began to walk the battlefields of Gettysburg and Chancellorsville—derailing the War Between the States and changing America forever. In this new nation, safety for all depends on the work of a few, and laws like the Native and Negro Reeducation Act require certain children attend combat schools to learn to put down the dead. But there are also opportunities—and Jane is studying to become an Attendant, trained in both weaponry and etiquette to protect the well-to-do. It’s a chance for a better life for Negro girls like Jane. After all, not even being the daughter of a wealthy white Southern woman could save her from society’s expectations.

But that’s not a life Jane wants. Almost finished with her education at Miss Preston’s School of Combat in Baltimore, Jane is set on returning to her Kentucky home and doesn’t pay much mind to the politics of the eastern cities, with their talk of returning America to the glory of its days before the dead rose. But when families around Baltimore County begin to go missing, Jane is caught in the middle of a conspiracy, one that finds her in a desperate fight for her life against some powerful enemies. And the restless dead, it would seem, are the least of her problems.

Remember “Pride and Prejudice and Zombies”? I DNF’d it, it was just plain bad and I was so disappointed because a historical fiction featuring zombies and some badass zombie-killing ladies sounded great. But “Dread Nation”? Now THIS is the book I’ve been waiting for and didn’t even know it! We get all of the zombie killing action and also some badass African-American women kicking ass and taking names. So basically it’s awesome and I’m going to try and convince you that you should all go pre-order it now.

First of all I really enjoyed the story in “Dread Nation”, African-American and Native Americans are sent to Combat Schools in order to learn how to battle the dead and are then “assigned” to white people to protect them. It’s also set in Reconstruction era America, which I enjoyed too since I don’t see many books set in post Civil War America. For the most part the plot focuses on Jane’s training at the combat school until she is recruited by a friend to help find out what has happened to a few of the families living in the area. From there a sort of “second part” to the plot comes into play which I won’t elaborate on because of spoilers. Just know….it was so, so good.

There’s definitely plenty of action in this book as well and my favorite parts were those where Jane would fight some shamblers/zombies! The pacing was fast and I had no trouble reading through this book quickly, there were a few parts that I felt slowed down a bit but for the most part it was evenly paced. Overall though for a historical fiction it was very non-boring (yes….non-boring is a word…).

And the plot twists! Holy crap were they fantastic! I didn’t find the plot to be predictable in the least bit and every time we were hit with a plot twist it was ALWAYS a good shock. I didn’t ever think anything was “too convenient” for the characters either, everything was extremely well written. There was also a bit of world building that I really loved such as the southern states being referred to as “the Lost States” since they were overrun with dead and also they use “ponies” as transportation which are sort of a steam-powered steel carriage since all of the horses were well….eaten.

I also really enjoyed that the story is broken up into the normal chapters told from Jane’s POV and then between chapters where we see letters written by Jane to her mother. These little bits offered a lot of insight into Jane’s life before she left for Miss Preston’s and I thought they were a nice touch.

I really liked all of the characters in “Dread Nation” but for the most part our main characters are Jane and Katharine with a couple of secondary characters.

Jane was a fantastic heroine, she’s smart, witty, loyal, fearless, and strong. She can be a bit hot-tempered at times and doesn’t always think before she acts, but that’s what made her an even more likable heroine: that she had flaws and she wasn’t perfect. Plus some of Jane’s retorts and inner commentary were just hilarious!

Then we have Katharine who is a bit more of a rule-follower, prim/proper, and she is also light-passing (which means she can pass as white). I loved Katharine’s character especially by the end of the novel, she’s just as brave as Jane and I found both characters to be so endearing.

There was a bit of conflict between Jane and Katharine at the start of the novel: Jane is jealous of Katharine in that she gets better treatment since her skin is lighter, and that she’s top of the class, and very pretty. At first I was extremely annoyed with this girl-on-girl hate, I mean Jane actually said she didn’t like Katharine because of  how “offensively pretty” she was. That’s not cool. BUT Jane doesn’t truly believe or think this since she is willing to look past all of that and work with Katharine and the two end up developing a great friendship. Yes, I really loved the wonderful and positive girl friendship that is shown in this book!

As far as the secondary characters I really enjoyed them such as: Aunt Aggie, Jane’s mother, Miss Duncan, Lily, and Mr. Redfern. They were all more so supporting characters but all had a lot of personality for such small characters. Then we had Jackson/Red Jack and Gideon who I adored, seriously, both of those boys were just great characters full of smarts and sass!

Then of course Jane, Katharine, and Jackson are all African-American characters and there were a few others and we also see Mr. Redfern who is Native American. So we have diversity with POC but we also have some diversity with LGBTQIAP+ characters too: Jane is bisexual (I believe, correct me if I am wrong please) and Katharine is aromantic/asexual, I am not sure which one exactly, but she did say she hasn’t ever had romantic feelings towards someone before.

Overall I thought the characters of “Dread Nation” were well developed, complex, and had a ton of personality.

However, the “villains” of the story were a little…ridiculous at times. Kind of cartoonishly bad, if that makes sense? Don’t get me wrong some of them were really awful, cruel, and corrupt, those were the more well done villains. But with other characters apart from the racism there really wasn’t anything that made them super evil and I felt they all started to blend together. This was the only real aspect of the story I felt could have used some more improvement.

There really isn’t any romance in this book, which is awesome! Instead the focus is more on friendship and family. There was a past romance between Jane and Jackson and during some parts of the story it seems she may still have feelings for him but she also develops a bit of a crush on Gideon as well. However, there isn’t really a romance that develops apart from those two things. I do think there may be a love triangle that develops in later books but I don’t think I would really mind because I liked both love interests.

I highly recommend checking out “Dread Nation” whether it’s because you’re looking for a diverse read, a badass zombie book, or just a fast paced historical fiction!