So this is kind of a book recommendation post of all of my favorite books and the post title is my way of trying to convince you to read them, by promising to be here to fangirl with you! Or if you have read them TALK TO ME ABOUT THEM BECAUSE THEY ARE AMAZING! Anyways……if you do decide to go read some of these books I will be here waiting for you…to fangirl over them together.

Also as you can see in the title, this is just part one since I had more books to discuss than I felt I could fit into one post. So if you enjoy this please let me know if you’d like to see part two!

Each title will be linked to my full review! 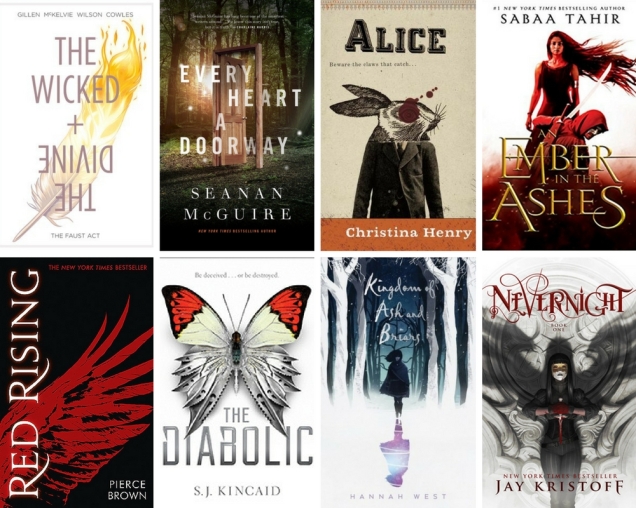 The Wicked + The Divine Series by Kieron Gillen

The plot revolves around the fact that gods/goddesses are reincarnated every ninety years and for two years they get to live it up as pop idols until they die.

This is probably my favorite graphic novel series, I love everything about them! The art is super colorful, vibrant, and gorgeous and the story is super intriguing with all of the different mythology that’s shown with the gods/goddesses. Plus the characters are full of personality and you either love them or love to hate them and the plot twists are fantastic.

I could gush forever about this series, honestly.

Every Heart A Doorway by Seanan McGuire

This is the book for all of us “adults” who are still waiting to tumble down that rabbit hole or open our wardrobes to Narnia. It’s about a group home for children that have been kicked out of their magical worlds and in this one a series of gruesome murders occur and the kids must work together to solve them.

The world building is so unique and creative and the characters are very diverse (featuring an aromantic main character and a transgender character for example). I really can’t recommend this series enough, it’s just all around perfection!

An Ember in the Ashes by Sabaa Tahir

This is like a YA Fantasy version of the Red Rising trilogy, that’s honestly the best way I can think of to describe it. The plot and world are all that brutal, as are the plot twists.

A girl poses as a slave in order to infiltrate a military academy for rebels in order to rescue her brother and a boy who is a soldier attending the academy and only wants to be free of all of it. The world is ancient Rome inspired, there’s plenty of action, the characters are well developed and complex, and the pacing is very fast!

(a.k.a all of Christina Henry’s retellings) This one is a little harder to recommend since it does have some very disturbing content such as torture and rape but overall I still think the story is very much worth the read. The way the author weaved elements of “Alice in Wonderland” with her own unique story and world was flawless and the characters were fantastic.

Probably my all time favorite series now because it has everything I love in a book: fast pacing, action, shockers and plot twists, lovable characters, and originality. It’s sort of a hybrid of fantasy, sci-fi, and dystopian genres too and is about Darrow who was a slave and must now infiltrate the inner workings of his oppressors in order to work to over throw them. I really love a good underdog story too….

The Diabolic by S.J. Kincaid

Nemesis is a Diabolic, made to protect a galactic Senator’s daughter from harm and when she is summoned to the galactic court as a hostage Nemesis takes her place.

I could gush and gush about this book it’s super fast paced, full of stabby action, and plot twists with galactic politics. Plus it’s got one of my all time favorite romances in it too….which says something because I really don’t like romance in my books!

Okay, so I quite literally JUST found out that this is going to be a series and I’m dead. My ghost is currently typing up this post. This book is so ridiculously underrated and a sequel is what I’ve been pining for for two years!

I digress though. This is about a girl who discovers she has incredibly rare magical abilities and basically ends up having to save the kingdom. There’s ALSO four different retellings interwoven throughout the story: Jane Austen’s Emma, Hua Mulan, Cinderella, and Sleeping Beauty. It’s so incredibly creative and I adored the characters.

Can I praise the glorious Jay Kristoff anymore on this blog? Yes. The answer is yes.

It’s been described as Hogwarts for assassins, which is fairly accurate. It centers around Mia Corvere who seeks revenge against the powers who destroyed her family, and ends up joining the Red Church group of assassins.

This story is beautifully written, full of badasses, plenty of action and stabby-stab-stab, fast pacing, and there’s a talking shadow cat. What more do you need to know?

Have you read any of these books? *let’s fangirl if you have*

Do you have any of them on your TBR?

Are there any that you just decided to add?

What are some books you always fangirl over?

31 thoughts on “Books I Will Definitely Fangirl With You About (A.K.A Read These Books!): Part 1”