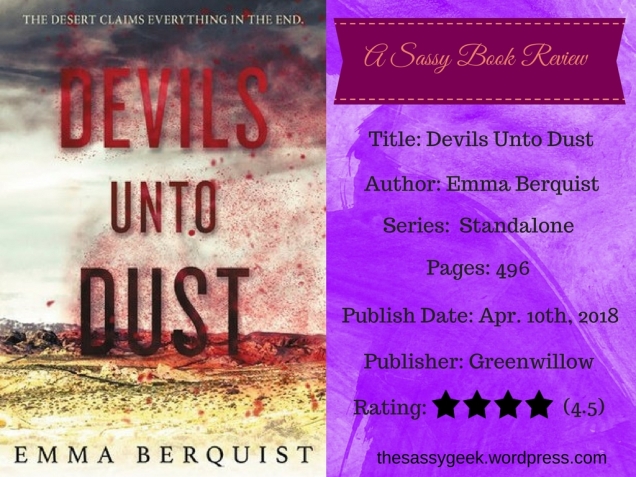 Ten years ago, a horrifying disease began spreading across the West Texas desert. Infected people—shakes—attacked the living and created havoc and destruction. No one has ever survived the infection. Daisy Wilcox, known as Willie, has been protecting her siblings within the relatively safe walls of Glory, Texas. When Willie’s good-for-nothing father steals a fortune from one of the most dangerous shake-hunters in town, she finds herself on the hook for his debt. With two hunters, including the gruff and handsome Ben, to accompany her, she sets out across the desert in search of her father. But the desert is not kind to travelers, and not everyone will pass through alive.

What an amazing debut novel! I can’t believe this is Berquist’s first book, she writes like a pro and honestly this book had pretty much everything I love and look for! This was just overall extremely well written and well executed, I could gush on and on!

First of all I’d like to say this is more of a infection-style book than a zombie book, they’re different trust me, and if you decided to give this book a try you’ll see why. I honestly prefer the whole “infected humans” thing over traditional zombies, I think it’s way scarier! On top of that it’s also a western, which can usually be a bit on the boring side for me but this one was action packed! There’s something happening almost constantly and my attention never wavered while reading, I was 100% invested in the story being told. The pacing is quite fast as well!

The story focuses on Willie as she sets out in search of her father to get back the money he stole, in order to protect her siblings from the “shake” (infected humans/zombies) hunters. This is more of a “journey” style plot but while others can get a little tedious and drag on, that wasn’t the case here. While she’s on the road there’s plenty of interesting happenings and when something isn’t happening, there’s a lot of character development. I would say this book was very well balanced, it was plot driven AND character driven, which in my opinion makes the perfect book!

I would say “Devils Unto Dust” is a bit more focused on the western aspect of the story instead of the horror side of the story. Which I was fine with, but I would have liked to have seen a teency bit more of the shakes. When the characters did have some run ins with the shakes, they were terrifying so I would have liked to have seen more of that. Seriously, I don’t know what it is but when zombies can run fast and reason they’re terrifying! As I said though this focused more on the western part of the story, with the six-shooters, tough as nails characters, and long walks through the desert. I thought the atmosphere was very, very well done, you really got a feel for the desert while reading. I think Berquist’s writing was especially good with this, she drew up so much imagery for the surrounding, it was fantastic.

I would have liked a bit more world building since it’s briefly mentioned how the plague started and how the rest of the country seemed to have abandoned the towns where the story takes place. Why? How? It really wasn’t too terribly important to the story but I personally would have liked a little more information on it!

And as I have already mentioned: the writing was great. Berquist did an amazing job setting the atmosphere and making me really feel for the characters and what they were going through. I have to say, without spoilers of course, there were more than a few times I teared up!

I always feel it’s sort of a rare treat for me to enjoy both a book’s plot this much AND its characters. With “Devils Unto Dust” I got just that! The characters were all just so adorable and amazing, I wanted to hug and protect them all!

Willie, the MC, is very tough and doesn’t take shit from anyone, she is also the eldest sibling and takes care of her three younger siblings. She will do ANYTHING to keep her siblings safe and I think that’s really a big part of why I loved her so much, her loyalty and determination. Also she’s just a straight up badass, but not too “in your face” if that makes sense because I feel like sometimes in YA authors try to make their heroines too “in your face badass”. She tends to be a little bit too quick-tempered and rude at times but I liked that she had her flaws, she was never unlikable to me though.

Willie’s siblings: Micah and the twins, Calvin and Catherine were all super adorable and endearing. If Willie didn’t already do a fantastic job of protecting them I swear I would jump straight into this book and do the job myself! Another side character is Micah’s best friend Sam, who is the town’s doctor’s son. Sam was also adorable, sweet, and a bit shy.

Then we have the Garrett brothers, Curtis and Ben, who Willie hired to escort her outside the town. Curtis is the oldest, I think he was described as being in his late twenties, and Ben is closer in age to Willie. Curtis is super cute and polite right off the bat while Ben is a bit more standoffish but he comes around! They definitely know what they’re doing when it comes to shake hunting, #1 badasses in the book in my opinion. Also I’d just like to go on record and say Curtis will forever be my book boyfriend now.

Overall every single character I just mentioned is extremely well developed, complex, and full of personality. I could probably gush about all of them forever!

I would say that “Devils Unto Dust” is very romance-free. There is a very small, subtle romance that sort of blooms but it’s more so a crush and it isn’t focused on whatsoever. I liked that it was there because I loved those two characters but I also really appreciate that it wasn’t focused on and never overtook any part of the plot. This is so unbelievably rare in YA books that I’m always SUPER happy when a YA book is romance free.

Overall I highly recommend checking out “Devils Unto Dust” if you’re a fan of westerns, infection style zombies (or ya know just zombies in general), or if you like your horror books a little more on the mild side. Still it’s a great story with even greater characters and I think I’ll be trying to get you all to read it forever!

14 thoughts on “ARC Review: Devils Unto Dust by Emma Berquist”