This doesn’t include novellas or graphic novels!

I was trying to think of a post I could do of book recommendations that kind of broke the mold a little bit. You know, not the typical “fantasy recs” or “sci-fi recs” (which I still love by the way!). PLUS everyone could use a good, short book every once in a while right?

I will link each title to my full review as well, if you’re interested! 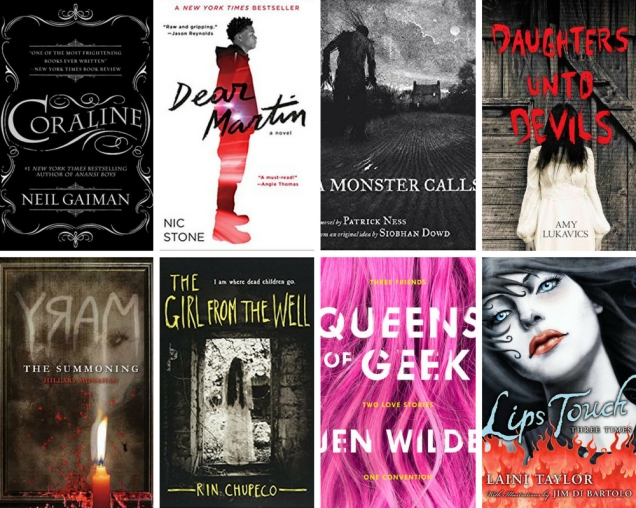 Even if you’ve seen the movie I still recommend checking this one out! It’s such a wonderful story that also delivers an eerie atmosphere at the same time, Coraline is such a fun and brave character to read about as well. Plus there’s a sarcastic cat character, bonus! You can never go wrong with reading a Gaiman book, his writing his practically flawless.

This diverse YA  book packs A LOT of punch especially for being so short, it focuses on police brutality, racism, and micro-aggressions. The writing is excellent and the main character’s POV is very refreshing. If you loved “The Hate U Give” I definitely recommend checking this one out as well!

A Monster Calls by Patrick Ness
Number of Pages: 226

This is a super beautiful and emotional story, I don’t think I can even properly put into words how much you need to read this if you haven’t already! It’s about a boy whose mother is dying of cancer and in order to cope with this a “monster” comes to tell him 3 stories. Be prepared to cry with this one!

Daughters Unto Devils by Amy Lukavics
Number of Pages: 231

There’s a few YA horror books here in a row but hey, they’re good ones I promise!

This one is set out on the prairie during the “pioneer days” (for lack of a specific date) and the main character becomes pregnant out of wedlock. Fearing what her Puritan parents will think if they find out she hides her pregnancy as they venture out in search of a new homestead. It’s a bit slow to start but slowly builds up the scare factor until one mind-blowing ending. You won’t be disappointed with that ending, trust me!

Mary: The Summoning by Hillary Monahan
Number of Pages: 256

Based off of the “Blood Mary” urban legend, this is a really creeptastic story about a group of girls who end up summoning the ghost of Mary and must find a way to stop her from getting to them first. This was surprisingly scary but definitely not for the faint of heart!

The Girl From The Well by Rin Chupeco
Number of Pages: 258

I was surprised by how many negative reviews there were for this book because I thought it was fantastic! There’s plenty of Japanese mythology and folklore included and also the terrifying main character who is a ghost and hunts/kills murderers. While you are kind of rooting for her vigilante style justice….she’s scary, especially to me since I’m forever scarred by ‘The Grudge’……

Queens of Geek by Jen Wilde
Number of Pages: 262

I’m not a big contemporary lover and especially not a romance focused one but THIS BOOK IS AWESOME! It’s full of diversity including POC and LGTBQ+ characters as well as characters with mental illnesses. Plus it’s just a cute, fun, and geeky story!

This is such an underrated book especially considering that it’s by Laini Taylor! Laini Taylor, people! It’s a book composed of three short stories, all illustrated by Taylor’s husband Jim di Bartolo (which his illustrations are gorgeous!), that focus on a kiss but not in the expected ways! Taylor’s usual gorgeous writing and creative world building are present in these stories as well!

The Hollow Girl by Hillary Monahan
Number of Pages: 272

This is another book that qualifies as YA Horror but isn’t all that creepy or scary but does deal with witchcraft and some heavy subject matter i.e. sexual assault. The main character is assaulted (off page, but brutal nonetheless) and her friend is beaten within an inch of his life. In order to save him, and exact her revenge, she must collect body parts from her assailants. This is a very heavy book but very much worth the read in my opinion, that is if you can stomach the many trigger warnings.

The Hundredth Queen by Emily R. King
Number of Pages: 287

This one was such an unexpectedly fun read for me, it’s an Indian-inspired YA Fantasy that centers around a character that is chosen by the Rajah to be his hundredth queen. However, she must fight for her place in a gladiator style tournament against this other ninety nine wives and all the while keeping her forbidden magic a secret. I thought this was fairly fast paced, loved the world building, and also loved how nothing was sugarcoated including the tournament.

“Dreamfall” is a book with a genre that’s hard to place, it’s sort of a YA horror and thriller mixed together. A group of teenagers, all with sleeping disorders, sign up for an experiment but end up in a shared dream-space filled with their nightmares. It’s a really unique book and definitely not boring!

This is another pretty emotional book, it’s a Peter Pan retelling told from Tinkerbell’s POV about the romance between Tiger Lily and Peter. It actually shows a pretty dark, sad side of Neverland but still very much worth the read especially if you’re a Peter Pan fan.

Such a fun contemporary, seriously so much fun! The main character is sucked into the posh world of royalty when her sister becomes engaged to Scotland’s crown prince and gets herself into more than a little trouble. There’s some great twists and overall loved Daisy, the MC, she was so sarcastic and hilarious. Usually I’m not a fan of contemporaries but even this book won me over!

This is an even shorter book to read through since it’s told in verse, which I normally don’t enjoy but just loved the story so much that it was easy to overlook. It’s about the true story of Artemisia Gentileschi a 16th century Italian painter, and how she uses the stories of biblical heroes, Susanna and Judith, to encourage her as she faces the trial against her rapist. It’s a very empowering and feminist book and I highly recommend you check it out!

Did you find any new books to add? Which ones?

What are some of your favorite books under 300 pages?