Another new month and another set of new book releases. I mean really it’s a miracle we can even catch up with all of the new releases!

Boos are listed in order of release date, with honorable mentions at the end!

I actually really enjoyed Raasch’s other book “Snow Like Ashes” (never finished the last book in that series though….) and was super excited for her new one featuring pirates, I heard that they were queer pirates too! Unfortunately that does not seem to be the case with the reviews I have read, it seems to be not all that LGTBQ+ and not full of pirate adventures. Not so sure if I’ll be reading it anymore now.

I’m currently reading this one and it’s actually really good so far! For a historical fiction it’s pretty fast paced and has kept me interested for the most part.

This one seems pretty underrated and sounds good it’s about an alternate world where everyone has nine lives. Definitely an interesting concept.

Genderbent Robin Hood retelling, which sounds amazing but this is another one that I haven’t seen that great of reviews for it. So it might be a borrow from the library type of book for me, just in case.

I’m pretty excited to give this one a go, it’s about a world where the executions of convicted felons are broadcasted on an app.

The Dark Beneath The Ice by Amelinda Berube
Release Date: August 7th

I have already read and reviewed an ARC of this one, was not a fan. You can check out my full review here.

I’ll be participating in a blog tour at the end of this month for this book, it’s a sci-fi where three main characters survive past their “death days” and have to flee the planet.

This seems to be a blend between sci-fi and fantasy where the main character is kidnapped and forced to be the body double for a cruel princess. Honestly it sounds amazing and I’ve heard lots of good things already! 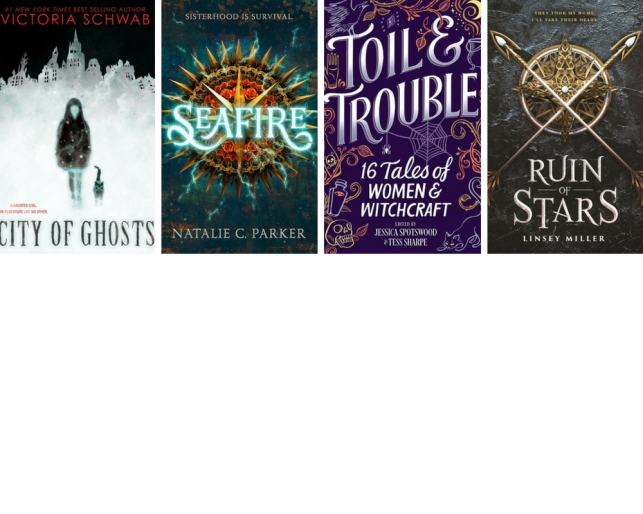 All I really need to know is that there’s ghosts/ghost hunting and Victoria Schwab wrote it.

I have an ARC of this one and am stoked to read LGTBQ+ witch stories, I’m also just a fan of anthologies they’re always fun.

I actually briefly started my ARC of this thinking the release date was the 7th but it switched but so far it was just as fast paced and intriguing as “Mask of Shadows”!