It has been a year since the mysterious godsgem cured Cadrium’s king and ushered in what promised to be a new golden age. The heroes who brought the gem home are renowned in story and song, but for two fellows on the quest, peace and prosperity do not come easily.

Apprentice Knight Kalanthe Ironheart wasn’t meant for heroism this early in life, and while she has no intention of giving up the notoriety she has earned, her reputation does not pay her bills. With time running out, Kalanthe may be forced to betray not her kingdom or her friends, but her own heart as she seeks a stable future for herself and those she loves.

Olsa Rhetsdaughter was never meant for heroism at all. Beggar, pick pocket, thief, she lived hand to mouth on the city streets until fortune–or fate–pulled her into Kalanthe’s orbit. And now she’s quite reluctant to leave it. Even more alarmingly, her fame has made her recognizable, which makes her profession difficult, and a choice between poverty and the noose isn’t much of a choice at all.

Both girls think their paths are laid out, but the godsgem isn’t quite done with them and that new golden age isn’t a sure thing yet.

In a tale both sweepingly epic and intensely personal, Kalanthe and Olsa fight to maintain their newfound independence and to find their way back to each other.

**** Huge thank you to Penguin Random House for sending me a copy in exchange for an honest review as well as allowing me to participate in the blog tour! ****

This was my first time experiencing the writing of E.K. Johnston and I have to say the hype is worth it! I had a ton of fun reading “The Afterward” and was even a bit surprised by how much I enjoyed it since it focuses on romance but also weaved in plenty of action and adventure.

The story is told from the two alternating POVs of Olsa Rhetsdaughter, a thief, and Kalanthe Ironheart, a knight in training. They are currently living “post-Quest” after saving the entire kingdom from an ancient evil, I really loved this idea for a story and it’s unique I just think it’s interesting to see what happens to the heroes after their quest is completed. The story is also told in two different timelines, Before and After the completion of the quest. I know it sounds kind of confusing but it really isn’t, it’s actually very easy to follow and really adds a lot to the plot being told this way. I personally LIVED for it!

The focus of the story is mostly on Olsa and Kalanthe’s relationship as they try to conquer the obstacles they face and find their way back into each other’s lives. Normally I’m not super big into romance focused plot lines especially in YA Fantasy as they are usually full of tropes. However, I thought it was an adorable romance and the author did a fantastic job of adding in enough action, adventure, and world building to keep things lively. I would say this is moderately paced, never slow, and will definitely keep your attention.

“The Afterward” takes place in a high fantasy world with moderate amounts of magic and a classical take on knights but with a more feminist twist, a TON of the knights are actually female in this world. I enjoyed the world and world building a lot and loved that it was simple yet intriguing. I have to say I’m definitely a little sad that this is a standalone because I would love to read more about this world Johnston created!

Then just a little side note here that is about a seemingly random scene in the book but one that I feel is important to mention. I actually really liked that menstruation was mentioned and in a normal, healthy manner. Most books, especially fantasy, skip over this and if they do ever mention it, it’s usually in a……darker way. I just think it’s nice to see it mentioned like this and I think it’s important especially in the YA genre since the audience are teens/young adults.

Overall I’d say this was excellently written, nothing ever felt too convenient, I was interested the entire time, and the ending wasn’t rushed or abrupt but rather perfect and satisfying.

This was very much a character driven book and while the story and plot held strong you can tell the characters are the real stars here. I couldn’t help but fall in love with every single one and that’s how I know I read a damn good book!

Olsa and Kalanthe made for great main characters with their flaws that they learn to overcome and overall development throughout the story. Olsa has a bit of a temper and is stubborn but she’s smart and extremely brave. While Kalanthe is almost too good and honorable for her own good, she’s so kind and generous you can’t help but feel like she’s the most precious thing ever!

There are also some fantastic side characters that I loved just as much as Olsa and Kalanthe and are their former companions on the Quest. Sir Erris, Sir Branthear, Sir Uleweya, Sir Terriam, and Mage Ladros. Honestly they all had a lot of depth and personality even if they didn’t have a lot of “page time” and I really loved each of them because of it.

The cast of characters are also very diverse: Olsa, Kalanthe, and Uleweya all have dark skin though Kalanthe’s is described as being a bit lighter; there is a minor female character who wears a headscarf; Branthear is transgender; Terriam I believe is aromantic or asexual since she is described as not having romantic interest in men or women; Olsa is bisexual; and Kalanthe is gay. I think the author did a fantastic job of being inclusive and it’s very refreshing to see such diversity in YA Fantasy!

As I already mentioned this is a very romance focused book but in the best way possible! Olsa and Kalanthe are really fantastic together, though they have their differences. The way the story is told with the timeline jumping back and forth it’s hard to say if it was actually slow burn but I’d say it was, there definitely wasn’t any insta-love that’s for sure. I think it’s just a timeless romance where they strive to overcome obstacles to be together and I thought they were a cute couple! If you couldn’t tell already it is a F/F romance as well.

I highly, highly recommend checking out “The Afterward” it’s honestly just such a fun read full of romance and adventure! The writing is nothing short of excellent and I think there’s something for every YA fantasy fan to enjoy here. Also if you’re looking for a fantasy book featuring POC and LGTBQ+ characters, look no further! 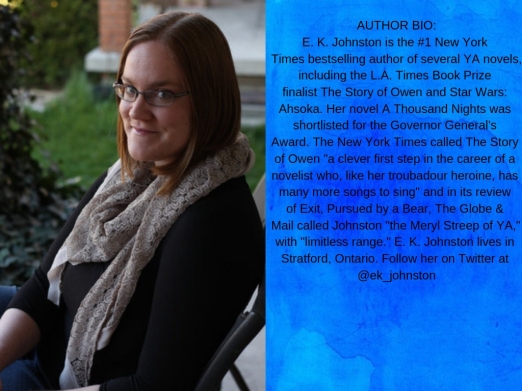 6 thoughts on “Blog Tour Review: The Afterward by E.K. Johnston”