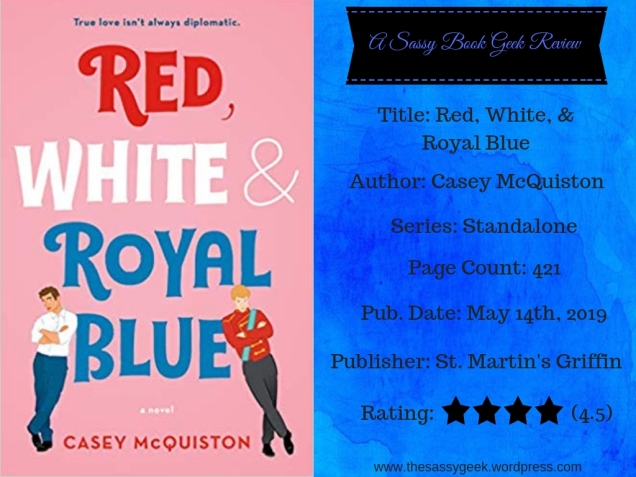 What happens when America’s First Son falls in love with the Prince of Wales?

When his mother became President, Alex Claremont-Diaz was promptly cast as the American equivalent of a young royal. Handsome, charismatic, genius—his image is pure millennial-marketing gold for the White House. There’s only one problem: Alex has a beef with the actual prince, Henry, across the pond. And when the tabloids get hold of a photo involving an Alex-Henry altercation, U.S./British relations take a turn for the worse.

Heads of family, state, and other handlers devise a plan for damage control: staging a truce between the two rivals. What at first begins as a fake, Instragramable friendship grows deeper, and more dangerous, than either Alex or Henry could have imagined. Soon Alex finds himself hurtling into a secret romance with a surprisingly unstuffy Henry that could derail the campaign and upend two nations and begs the question: Can love save the world after all? Where do we find the courage, and the power, to be the people we are meant to be? And how can we learn to let our true colors shine through?

**** Thank you to St. Martin’s Griffin for providing me with a copy via Netgalley in exchange for an honest review ****

I would like to just start this review of by saying: THIS IS A NEW ADULT NOVEL. It’s not YA by any means and there are some sexually explicit scenes. I just wanted to clear that up for anyone thinking this might be Young Adult because books get mis-genred like that a lot (mis-genred can be a word, right?).

I, like a TON of other readers, really enjoyed this book. It was fun, fluffy, and just full of ALL the adorable-ness! With that being said it just wasn’t enough, personally, to give it a full five stars. It’s definitely a great read though so let’s get into that!

The whole premise of the book is amazing: the First Son of the United States falling in love with the Prince of Wales. I love it! I lived for it! I’m always a sucker for any kind of royal romances too! I really enjoyed their forbidden romance/enemies to lovers romance and their overall story of overcoming the obstacles of their status, to be together.

Also everything is so freaking adorable, they are adorable! Trust me when I saw you will be rooting for Alex and Henry the entire way. I also enjoyed a lot of the politics that came into play, it was a nice sub-plot to the romance and kept things interesting too. There’s also a TON of modern humor throughout the book and there were so many hilarious antics and jokes that I was laughing and smiling like an idiot throughout my entire read. I mean there’s a scene where they do Queen karaoke, who doesn’t want to read about that?

And the writing was fantastic, I loved how easily everything flowed and nothing ever felt forced. There were a few times that the time shifts or location changes were a little abrupt for me though. One minute I’d be reading about a conversation Alex was having with someone at one location and BOOM he’s in the White House talking with his sister. It disoriented me a bit because I’d have to re-read the last few sentences to make sure I was following along and a character didn’t just appear out of nowhere.

The main focus of the story is, of course, about the romance between Alex and Henry. However, there are some politics to keep things interesting, as I mentioned a bit earlier. This is where a few twists came into play and while some of them were a bit predictable, others kept things…lively, we’ll say. It’s still most definitely a character driven story though, which those are usually the best in my opinion!

The pacing was pretty moderate I would say as well, I definitely keeps your interest but for me this wasn’t quite “un-put-downable.” It’s also a standalone novel so everything is wrapped up nicely at the end and you’ll be gushing and throwing up rainbows like the rest of us!

Naturally the characters were my favorite part of “Red, White, and Royal Blue”, I thought they were all just so much fun and had so much personality! Precious cinnamon rolls, all of them! I loved how diverse the cast was and I loved that it was done so nonchalantly, they were who they were and it was fine and not a big deal. (of course to readers it is though because hello representation!)

Alex – Our First Son of the United States who is biracial (White and Mexican) and bisexual. He’s hilarious and is full of sarcastic comments, definitely an enjoyable main character.

Henry – The most adorable Prince of Wales who is gay and actually a bit quiet, shy, and in general soft. He can be pretty cheeky when he gets warmed up though, definitely the perfect contrast to Alex’s excitable and outgoing ways!

June – Alex’s sister, also biracial, and the First Daughter. She’s got her shit together! I loved how in charge she was and kept everyone on the right track all the time, she’s amazing!

Bea – Henry’s sister who made some rough choices after the passing of their father, everyone judges her for it in the public eye but she takes no one’s shit! I loved how feisty she was and honestly I think she was one of my favorite side characters, strong as hell that’s for certain.

Nora – I feel like Nora is definitely the “cool girl” but at the same time she’s a wonderfully geeky computer analyst and super genius. She’s bisexual and also best friends with Alex and June.

Pez –  One of Henry’s best friends, a philanthropist in charge of their own endeavors and seems to be genderfluid or at least doesn’t conform to society’s gender roles. I’m not sure what Pez identifies as sexually but they pursue June with no abandon (it was adorable though). Honestly, one of my fave characters.

I also was in love with Alex and June’s parents, I mean Ellen is the first freaking female President so she was a badass. Also love how supportive they were too though.

And as you would expect the romance is the main focus of the book and it is was remarkable! Like everything else in the book it was also adorable and fun and just downright HAPPY! For a book that relies so heavily on the romance I was delightfully surprised that it was such a slow burn. I was also LIVING for the air of forbidden romance and the enemies to lovers trope. Alex and Henry started out as bitter rivals and had to fake a friendship, which was hilarious, and from there turned into lovers. I’m usually not a fan of that trope but it worked so well here and Casey McQuiston did an amazing job with it!

Overall it’s a fantastic book full of amazing and diverse characters and is just adorable and a ton of fun! It’s a blast to read! It just wasn’t quite a full five star read for me, it lacked that “un-put-downable”-ness in my case but it is most definitely a fantastic book and one that I recommend reading. I mean, I’m not a huge New Adult or Romance reader and I really enjoyed it!

Links (Check it out on Goodreads or Buy a Copy!):
Goodreads / Barnes & Noble / Book Depository / Amazon