It’s that time again, (even though it’s late) time for my “Best Book of the Year” post! In this case it’d be 2019 of course. I will include my full reviews if I have them available otherwise I’ll link the title to its Goodreads page if you want more information! I’ve only included books I rated 4 stars or higher since that’s what I consider “the best of the best” personally.

I actually had this book sitting on my Kindle for a while before it became the hit Netflix movie and all the hype got me to finally read it. Boy, was I not disappointed! This book was exhilarating and terrifying, I could not put it down! Definitely a book I’ll be recommending to all of you over and over again.

Another book that I absolutely devoured, this one was very addictive and I couldn’t put it down. It’s about a mother whose small child seems to have it out for her, that is so she can have the father all to herself. Honestly, I have never been more terrified of a child!

This is a diverse and feminist YA fantasy about what happened to the heroes after they completed their epic quest. I really loved the whole idea behind the story and the writing is fantastic. It’s a bit more romance focused than I normally would have liked but it was just THAT GOOD.

This is a Middle Grade space opera that mixes in a ton of Korean mythology, its also Own Voices and diverse with a Korean main character. It’s also just a really fun story that’s fast paced, action packed, and engaging.

It Ends With Us by Colleen Hoover

This book really blew me away, so much in fact that I felt like I couldn’t even write a comprehensible review. Colleen Hoover is a very hyped author and she’s known for romance (new adult) which isn’t a genre I normally enjoy, however, I caved and read this one. It was every bit as amazing as the hype said, I couldn’t stop reading! It deals with some sensitive subject matter but it’s just so beautifully written and honestly such an impactful story.

A feminist book about a group of vigilante girls taking revenge on the men who have hurt them, yes please! This book really delivered in my opinion, it was a unique idea and it was executed well. The girls were badass and the story also ended up being pretty morally gray, honestly just a great story all around.

At this point I don’t think Jonathan Janz can fail me and this book was no exception! It’s about a group of writers being invited to a retreat by a reclusive author to teach them his writing tricks, however, they are pulled into a sinister game instead. It’s fast paced and there’s plenty of action, the characters are also very well developed. I highly recommend checking out any of his work if you’re a horror lover though!

I absolutely love the Witcher video games so when I saw this massive tome at my library I knew I had to read it. I have to say I really enjoyed these “extra” little stories, they fit in perfectly with Witcher lore and the art is gorgeous.

My Sister, The Serial Killer by Oyinkan Braithwaite

A novella that takes place in Nigeria about a sister who is constantly cleaning up her sisters “messes”, which just so happen to be boyfriends that she has wound up murdering. However, she questions whether she should make more of an attempt to stop her sister when she begins dating her boss. This was a good, quick read! It was easy to be pulled right in and it’s all pretty messed up in a delightfully wicked way.

I feel like this book doesn’t really need any introduction at this point, it’s pretty hyped but for good reason! It’s about the bisexual First Son of the President of the United States falling in love with the closeted, gay Prince of Wales. It’s a fun, fluffy, and adorable read with tons of diverse representation! I am not normally a fan of romance books but this one was just loads of fun. 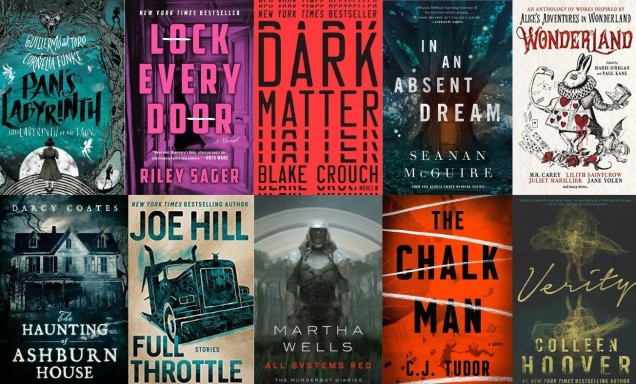 Pan’s Labyrinth: The Labyrinth of the Faun by Guillermo del Toro & Cornelia Funke

If you’ve seen the film this is essentially the same thing but more in depth with some more details. I have to say I enjoyed this even more than the film just because there was more detail. It’s very dark fantasy overall and not the happiest of stories but it’s just such a GOOD story after it all.

I didn’t love “Final Girls” but I didn’t hate it either, so I wasn’t too sure about how I would like Sager’s other novels but after reading the synopsis for this one I was really excited. A young woman gets hired to “apartment sit” in a lavish, elite apartment building but something sinister is going on behind the scenes. This was such an addictive story, I couldn’t put it down and the overall atmosphere was so deliciously creepy!

I originally wasn’t even that interested in giving this a read but all of the hype and glowing reviews got me curious. I borrowed it from the library and, again, could not put it down! I would have never thought that something dealing so heavily in science would be this interesting to me but boy was it good, it’s very much a “sci-fi thriller”. I wish I could say WHAT exactly this book is about other than a man being kidnapped and injected with a strange drug and awakens in a strange new reality. BUT! I do not want to spoil a single thing because it’s so dang good!

In An Absent Dream (Wayward Children #4) by Seanan McGuire

The fourth installment in this series is just as good as the rest, trust me! I could honestly even say that this is one of my favorites just because it has so much unique and fascinating world building. It tells the backstory of Katherine Lundy, the therapist at the school in the first book, and about her time in her world the Goblin Market. The world building for this book blew me away, it was so interesting and I can’t believe the creativity behind it all! The writing and story overall are top notch and it’s another fantastic addition to the series.

I was offered this book for review and I couldn’t believe I had’t heard of it already because it’s a horror anthology of ‘Alice in Wonderland’ retellings! It’s right up my alley! There were a few stories that didn’t quite work for me but there’s more than a few that make the book worth picking up.

The Haunting of Ashburn House by Darcy Coates

I picked up this book when it was slightly cheaper on Kindle (it’s normally around $4.99 but I got it for $0.99, my patience paid off!) because Destiny @ Howling Libraries recommends Darcy Coates highly and I love a good ghost story! I’m honestly so glad I gave this a read because it was AMAZING, the writing is great and I was so creeped out while reading and loved it!

Although I own several of Joe Hill’s novels I had yet to read one of them (shameful, I know) but I was definitely impressed with this one. I’m also a fan of short stories in general especially creepy ones. Not every story was creepy but there were some really well written ones and I enjoyed my experience overall.

Why did it take me so long to read these books? Why?! I absolutely loved reading from “Murderbot’s” POV, it’s sarcastic and hilarious. I also just loved how much action and world building was jam packed into this little novella, it’s a fantastic world and character Wells came up with here and I’m super excited to read the rest!

The Chalk Man by C.J. Tudor

Another one I finally caved and read even though there’s so many other books I need to read too. I really enjoyed Tudor’s writing style, it kept me completely engaged the entire time and there’s tons of little twists and turns. The story doesn’t pull any punches either.

And another Hoover book makes the list, woohoo! This book is 100% different from her other novels though as it’s a thriller and it’s very dark and gritty. It’s very addictive and I finished it in no time, it’s messed up but in the way that I could not stop reading (as bad as that sounds).

Have you read any of these books as well? What did you think?
What were some of your favorite reads of 2019?