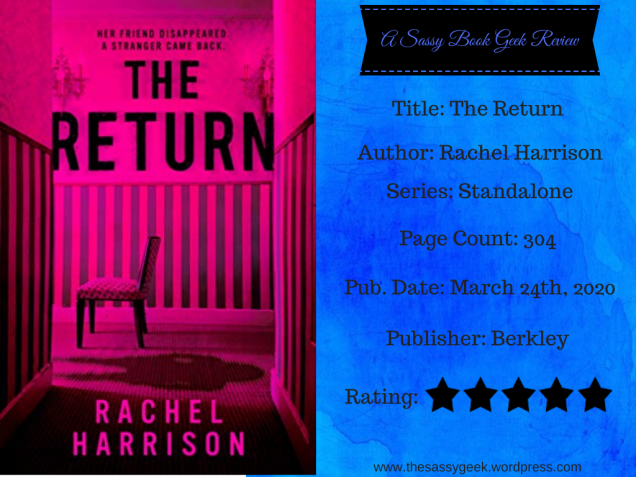 An edgy and haunting debut novel about a group of friends who reunite after one of them has returned from a mysterious two-year disappearance.

Julie is missing, and the missing don’t often return. But Elise knows Julie better than anyone, and she feels in her bones that her best friend is out there, and that one day she’ll come back. She’s right. Two years to the day that Julie went missing, she reappears with no memory of where she’s been or what happened to her.

I saw that this was being classified as horror and knew I had to give it a read although I wasn’t quite sure HOW it was going to be horror. The less you know, the better! Trust me! It was definitely creepy and addicting, overall a fantastic book and I’m really excited for everyone else to pick this up and give it a read. I honestly cannot believe this is a debut novel, it’s written well and keeps you in such suspense and I’m really looking forward to reading more by Rachel Harrison in the future!

The story is about a group of friends reuniting after one of them, Julie, has been missing for two years and suddenly reappears. The hotel they travel to for the weekend is strange ,to put it lightly, and something seems off about Julie since she came back too. I loved this story line to be honest, everything about it was interesting: the hotel, the group of friends, what exactly happened to Julie. There’s so many questions I had through out reading and I could not put this book down until I had all of the answers. I wouldn’t say that this book is fast paced per se but the story and writing make you keep turning pages. It’s a very atmospheric book but still has a great plot and great characters. Overall I would say it’s a bit more on the character driven side but there it is still a very intriguing plot.

I would have said that the horror aspect wasn’t such a big factor at the start of the book and might have been a good creepy, read for non-horror fans but once you get towards of the end of the book it gets pretty damn terrifying. So if you’re looking for more creepiness trust me when I say you’ll get it by the end of the story! It’s got some supernatural elements as well as some light body horror.

I also really loved the setting in the oddly decorated and very extravagant Bed and Breakfast out in the country. It was actually kind of creepy on its own and I was living for it. Also Julie’s room, called the Lenore, was Edgar Allan Poe themed and had a secret bathroom entrance behind a bookcase. It was cool as hell and I geeked out over it.

I would have to say the ending of the story is my favorite part, it’s where all the action is and it is so freaking creepy! I loved it! It’s also where we get all the answers! The ending is slightly open but in a way that I thought really worked. I didn’t have any pressing questions but there’s that tiny bit of wonder at the end that makes it so eerie.

The book does focus pretty heavily on the characters and their dynamic, they’re a close group of friends and all have very distinct personalities. The story is only told through one POV, Elise’s, and is told through the present and some flashbacks from before Julie came back. I thought the flashbacks worked well to create some mystery about Elise’s past and how it has affected her current situation and outlook on life. Overall the characters are all very well developed and have some depth.

There’s Elise, our main character and POV character, who lives on her own and is single. She considers her friendship with Julie to be very precious and thinks that they are the closest out of their group of friends. I don’t have too much to say about Elise other than that she was a perfectly adequate protagonist, I don’t want to delve too much deeper into it because of spoilers. But she has some stuff she’s hiding!

Then we have Mae and Molly, the other friends that are important to the story but not quite as much of a focus as Elise and Julie. Mae is in the fashion industry, she’s a lesbian, she’s Chinese, she was adopted and raised in the South where she has a thick accent at times, and she has albinism. I did like Mae but I didn’t like how sensitive she was about certain things and I didn’t like how she never takes other people’s finances into consideration when planning extravagant outings.

I’m not quite sure what ethnicity Molly is but she stated that she has immigrant parents and she also suffered from childhood cancer to which she lost a leg. She uses a prosthetic. She’s honestly my favorite character because I felt I had a bit in common with her, she’s blunt and tells it like is. If she wants to say something she will say it! She’s also pretty hilarious.

Lastly there’s Julie, the usually flamboyant young woman who cares a lot about her looks and her status. However, she’s come back and isn’t quite herself…. I won’t say too much more about Julie’s character because I don’t want to spoil your fun!

I have to say I also really enjoyed all of these women’s friendships, they had their differences but overall I think they’re a good group of friends. It was fun to watch their dynamics at times and I loved that no matter the time that has passed, the distance between them, or their differences that they remain close friends. I actually cared about all of them and their relationships.

Overall this is a fantastic story and a fantastic horror story at that! I really enjoyed the atmosphere, the story, and the characters. Honestly just everything about it was awesome, I couldn’t put it down. I’m so excited for other readers to to finish this especially my fellow horror lovers! Seriously, when you finish this talk to me about it! I have a lot of feelings!

6 thoughts on “ARC Review: The Return by Rachel Harrison”