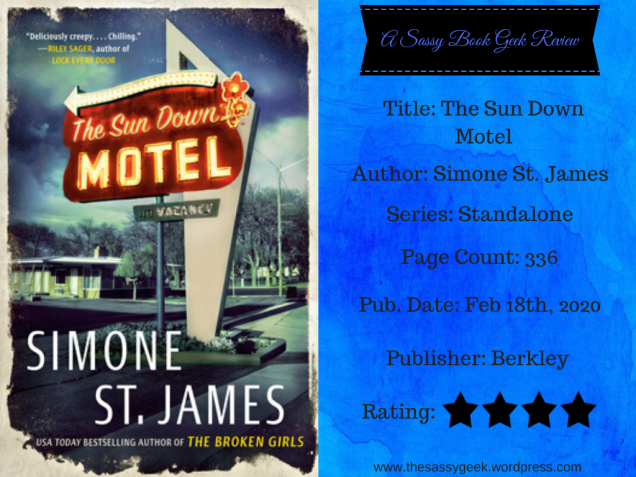 The secrets lurking in a rundown roadside motel ensnare a young woman, just as they did her aunt thirty-five years before, in this new atmospheric suspense novel from the national bestselling and award-winning author of The Broken Girls.

Upstate NY, 1982. Every small town like Fell, New York, has a place like the Sun Down Motel. Some customers are from out of town, passing through on their way to someplace better. Some are locals, trying to hide their secrets. Viv Delaney works as the night clerk to pay for her move to New York City. But something isn’t right at the Sun Down, and before long she’s determined to uncover all of the secrets hidden…

This is a book that I feel like might not be on a lot of readers’ radar but it should be! I was actually really surprised by how much I enjoyed this, I was not expecting the ride this book took me on! This is a great supernatural thriller, that I just had a blast reading.

The story is told in two alternating POVs: Viv in 1982 and her niece, Carly, in 2017. Normally I’d find this to be a bit confusing or at the very least tedious to keep track of, two POVs in different timelines. However, I actually felt it worked really well with this story and kept things very interesting. The only downside I saw with this was that at certain points during the book we would learn one thing in a character’s chapter that was still a mystery in the other POV. So it could be frustrating at times but the other character would always learn fast after something was revealed to the reader.

The pacing is consistent and the writing is fantastic, I was so entranced while reading I just did not want to put this book down. It’s so wonderfully atmospheric too, it’s eerie and mysterious. It made the story all the more compelling. I really enjoyed that this has a supernatural twist as well, it plays a role in the overall story and adds, again, to that eerie atmosphere. My only problem with this twist (which I won’t spoil!) was it never really got any sort of explanation. That’s not to say it was a complete jumbled mess by any means, it’s just that I wanted to know the “why?” of it. That’s just how I am as a reader though, I love explanations.

The overall plot in “The Sun Down Motel” is one that really worked for me as I’m interested in true crime related things. This revolves around a missing persons case and enters the realm of serial murders. As morbid as that sounds it’s always been something that has interested me and this was damn interesting. I don’t want to spoil anything else so I’ll leave it at that, the story is very engrossing.

This sort of goes hand in hand with my love for the general atmosphere of this book but I just need to mention it on its own as well. The setting. The setting is so amazing and I personally really enjoyed it. It’s, of course, mostly set at the infamous Sun Down Motel where some strange and nefarious things have happened over the years. I thought the setting was interesting and unlike anything I have personally read before.

There are also quite a few twists along the way that I didn’t see coming. It kept me on the edge of my seat! The only thing I didn’t quite enjoy was that the ending felt a little rushed and kind of “meh”, certain things just did not make sense to me. The ending wasn’t confusing but I just didn’t understand certain choices the author decided to go with. That’s probably one of my only gripes about the book though.

The characters and plot are pretty equally balanced, the characters in this story certainly help drive the story forward as well. As I already mentioned we have two POV characters: Viv in 1982 who goes missing and her niece, Carly, in 2017 who goes to the Sun Down Motel looking for clues to her aunt’s disappearance. I actually really enjoyed both characters, there isn’t anything too terribly memorable about them but they were likable. They’re smart and spunky, that’s for sure! I wouldn’t say either of them are very complex or anything but they have personality.

There are a few side characters that come into play and I actually really liked them all as well. There’s Heather, Carly’s roommate, who has anxiety and loves true crime and helps Carly out with her investigation. I have to say this was incredibly relatable to me for many reasons and while reading I kept asking myself “is this character actually me? Sounds like me”. It didn’t help that the first encounter with the character had her packing away a lot of pizza, which is my favorite food. I’m telling you guys, this character was me!

There’s also an incredibly badass female cop who doesn’t take anyone’s shit, Alma. And Marnie, the African-American photographer who is also a badass. Seriously these two women rocked. And then I’ll mention Nick, the swoon-worthy love interest who I don’t have too terribly much to say about, unfortunately. He’s a nice guy that kind of comes of as a bad boy but really isn’t. I thought he and Carly were cute though the romance is not a big focus so I’m not going to use a separate paragraph to discuss it. It was cute, I liked it!

Overall I would definitely recommend checking this book out, it’s a very intriguing mystery that keeps throwing twists at you the whole way. It’s a great new mystery thriller with a supernatural twist and I think a lot of people will enjoy it.

One thought on “ARC Review: The Sun Down Motel by Simone St. James”