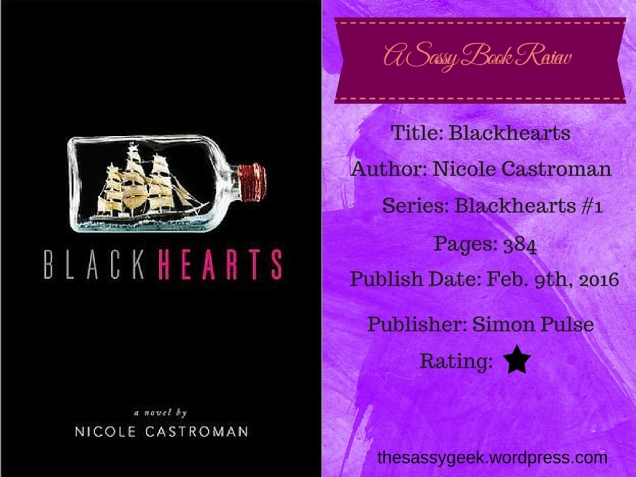 Blackbeard the pirate was known for striking fear in the hearts of the bravest of sailors. But once he was just a young man who dreamed of leaving his rigid life behind to chase adventure in faraway lands. Nothing could stop him—until he met the one girl who would change everything.

Edward “Teach” Drummond, son of one of Bristol’s richest merchants, has just returned from a year-long journey on the high seas to find his life in shambles. Betrothed to a girl he doesn’t love and sick of the high society he was born into, Teach dreams only of returning to the vast ocean he’d begun to call home. There’s just one problem: convincing his father to let him leave and never come back.

Following her parents’ deaths, Anne Barrett is left penniless and soon to be homeless. Though she’s barely worked a day in her life, Anne is forced to take a job as a maid in the home of Master Drummond. Lonely days stretch into weeks, and Anne longs for escape. How will she ever realize her dream of sailing to Curaçao—where her mother was born—when she’s stuck in England?

From the moment Teach and Anne meet, they set the world ablaze. Drawn to each other, they’re trapped by society and their own circumstances. Faced with an impossible choice, they must decide to chase their dreams and go, or follow their hearts and stay.

I am very disappointed that I have to write a negative review for this book, I desperately wanted to love it but it failed to deliver on all fronts.

First of all let me be very clear about what kind of book “Blackhearts” is, it is NOT a tale about Blackbeard or pirates. What it IS, is an extremely boring romance that uses the the name of Edward Teach for no real purpose at all. I honestly don’t know why the author bothered putting his name in it at all since there’s nothing Blackbeard-esque in this book at all. If you changed the character’s name from Edward Teach to something else, the story wouldn’t even change a little bit.

So if you’re looking for an exciting twist on the story of Blackbeard, the fearsome pirate or looking for a book with some badass piracy, look elsewhere because you definitely won’t find any of that in “Blackhearts”.

Plot? What plot? I’m not sure what the point of the entire story was let alone what the plot was, other than how Anne and Edward NEEDED to be together. That’s the plot, their “romance”.  This book is ALL romance, there’s no historical fiction, there’s no action, and there’s no excitement at all.

The closest thing that came to excitement in “Blackhearts” was the gossip. Oh no the maid is cheating on her fiance with the stable-boy! Oh no a woman is pregnant with another man’s child! Who cares? Where are my damn pirates?!

There’s also zero world-building, now since this is technically historical fiction I know there isn’t any unique world-building to really be done but that’s no excuse to cut it out completely. It took me a long time to even figure out we were in England! I thought it was taking place in some Caribbean port city! There was zero description of the city/country and there was no atmosphere either. It was bland and boring. Also the only real historical fiction in the book was how sexist, racist, and classist everyone was.

Well first we have Anne Barrett, who is more the main character than Edward Teach, and honestly she’s pretty unimpressive. She’s very fickle, first all she wants is to get on a ship and leave England behind then all of a sudden the only thing she wants is Edward. Does that sound like a determined protagonist to you, because it sure doesn’t to me. Anne gave up on her “dreams” way too easily. There’s absolutely nothing interesting about her, she doesn’t have any special personality or skills.

Edward Teach, is supposed to be the real  main character here but gets overshadowed by Anne, who had a lot more personality than he did. He’s supposed to be the teenage version of the badass, fearsome pirate Blackbeard and wow is he ever the most disappointing character. Edward never proves his badassery or heroism in this story, there’s nothing remarkable about him. In place of a pirate we get a very sad excuse for a romantic hero, Teach definitely didn’t instill any romantic thoughts in my head. He isn’t charming and he certainly isn’t romantic, he’s a border-line stalker.

I won’t even discuss the secondary characters since they were all even more under-developed than Anne and Edward.

Every character in “Blackhearts” is flat and lacked development. I felt zero connection with any of them and honestly if everyone had met a terrible demise at the end of the book, I could have cared less.

Since the entire book is about the romance you would think it would at least be a nice, slow, developed romance right? Wrong. It’s pretty much insta-love. It’s actually worse than insta-love since Teach pretty much stalks and intimidates Anne until she finally decides to just give into his advances.

This is honestly one of the worst romances I have ever had the displeasure to read about. Anne and Edward have zero chemistry and reading about their “romance” was about as interesting as watching the grass grow.

I’m very disappointed with “Blackhearts”, it was extremely uninteresting. Even the romance that was the central point of the book was very lacking. There was zero action and zero pirate-related content, and for a book supposedly about Blackbeard I found that to be very shocking.

No, I can’t recommend this to anyone honestly. What I do recommend is skipping this book, unless you love reading PG romances because with this book that’s all you can expect.