Last day of October and Halloween, so I’m doing another tag and attempting to really squeeze it in here!

I found this tag on Hardback Hoarder’s channel and it was created by The Restricted Section.

Please feel free to do this tag if you’d like, even if you aren’t tagged below!

Here are a few other Halloween themed book tags:

END_OF_DOCUMENT_TOKEN_TO_BE_REPLACED

Yes, time for yet another Halloween/spooky book tag! I mean really though does anyone get tired of these in October, I sure hope not at least because I have a few more! These questions are pretty straight forward so my answers are relatively short.

I found this on Hardback Hoarder’s channel so please go check her out, she does so many amazing tags as well as other great content. This tag was originally created by The Book Pusher.

END_OF_DOCUMENT_TOKEN_TO_BE_REPLACED

I feel like I had to add that “Saw Franchise” bit in because Jigsaw Book Tag doesn’t get the point across as well I feel, someone might think this is a literal Jigsaw Book Tag, which it isn’t! This is based off of the Saw Franchise (or the latest ‘Jigsaw’ movie which I have not seen yet). I thought this would be a fantastic tag to do in October since I like to do as many Halloween/spooky posts as possible!

I found it on Hardback Hoarder’s channel and the original creator is Wolfshot Publishing.

END_OF_DOCUMENT_TOKEN_TO_BE_REPLACED

I found this  tag over on Hardback Hoarder’s channel so be sure to head over and check out her video of this tag as well! This is probably going to be my last Halloween themed book tag but maybe I’ll squeeze in another, you never know.

This tag was created by The Bookish Porcupine.

1.) Creepy house on the corner of the street: Book with a creepy cover

It’s definitely one of the creepier covers I have seen! Also my current read and so far it’s not disappointing!

Fantasy is always good to me for this and so I’ll pick a fantasy book on my TBR that I’m hoping will be completely immersive! I adore Laini’s writing style so I sure I’ll adore this book as well.

3.) The house that gives out the cheap candy: Guilty pleasure book

Definitely “Paper Princess”. While I do mention that I loved it a bit it’s still a bit of a guilty pleasure for me because I NEVER like books like that but for some reason that one was just so addictive!

4.) The house with the best decorations on the block: Best haunting/Halloween themed cover 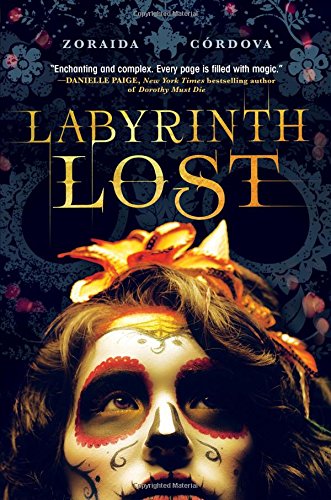 It’s a perfect combination of witches and Halloween colors so I think it fits very well!

5.) The house that gives out the best candy: #1 Halloween recommendation

Slasher Girls & Monster Boys is a great read for Halloween and since it’s an anthology of short horror stories there should be a couple stories in there for everyone, though I thought pretty much all of them were fantastic.

Definitely unique since that’s what I try and do for all of my costumes every year!

Both? I supposed Chocolate wins out though….

I’m going to tag a few of my newest followers!

I found this little tag over on Hardback Hoarder’s channel and thought it would be a super fun tag to do for October. There really aren’t a ton of horror type book tags out there that I haven’t done yet, which is sad! However, I have found a few so keep an eye out for them!

Clever Fox is the original creator of this tag!

1.) What goes bump in the night? Name a book that has legitimately scared you while reading it.

I know a lot of people didn’t find this book all that scary but it terrified me because I am deathly afraid of disjointed walking, any kind of crawling, and ghosts that even slightly resemble Samara from The Ring or the ghost from The Grudge. They terrify me. So of course all of those things are present in this book and while reading it I couldn’t even walk past a room that had its life off!

2.) Jack O’ Lanterns and Classic Costumes: A book you always reach for during Halloween time.

I don’t usually have time to do re-reads but I always attempt re-reading “Slasher Girls & Monster Boys” just because it’s made up of a bunch of fantastically scary short stories which makes it perfect for Halloween reading.

3.) Black Cats and Magic Mirrors: A book you love that is laced with superstition and/or magic.

How about both? “Labyrinth Lost” has a bit of superstition since the main character and her family are brujas (witches) who also happen to perform magic! It’s a wonderful story full of diversity as well.

(Besides everyone in the Harry Potter series….)

I really liked Tea from “The Bone Witch” I thought she was pretty likable and her power of necromancy is definitely neat.

5.) Ghouls and Ghosts: A book that still haunts you to this day (good or bad).

I’m still salty about so many things that happened in this book and I know it will continue to haunt me as well!

6.) Haunted Graveyard: You’re all alone in a haunted graveyard, you get ONE book to give you comfort, which is it?

I would want to bring a book that would keep me so distracted I wouldn’t notice all the creepies around me so “Night Film” is perfect for that. This book definitely held my attention in that way!

Do witches kind of count? If they do I definitely pick witches but if they don’t I like werewolves the best but I don’t come across too many books that include them.

8.) In the dead of night: Pick a book with a black cover.

The Night Circus! Fabulous book, gorgeous cover that also happens to be black.

Feel free to do this tag even if I didn’t tag you below!

It’s my favorite time of year again, Halloween! I’ve been excited all week to read horror books, watch scary movies, and do a Halloween book tag of course!

Michelle over at Book Adventures hosts this meme every week and she has decided to make this fabulous Halloween Book Tag herself! Make sure you guys credit her and go check out her blog.

I’ll be treating all of these as questions even though they technically aren’t, just so you know.

1.) Favorite Scary (Must Read) For Halloween?

This book is probably one of the scariest I’ve ever read, period. Is it scary the entire way through? No. It’s still fucking terrifying though! The best way for me to describe it is to compare it to two well known (scary as shit) horror moves, “The Ring” and “The Grudge”. Just so you all know I watched “The Grudge” when I was in the 4th grade and I can’t even THINK about that movie and not have nightmares, so when I compare this book to that then you understand fully how scary this book is.

If you want to read a longer more gif-filled rant about this book then you can check out my review for it here.

I would have said the cover for “The Girl From The Well” is the scariest cover BUT I just used that book for the previous question. So instead I’ll go with the cover for “Slasher Girls & Monster Boys” because something about that little…creature thing on the front really creeps me out. Just look at it! It’s disturbing! Although the content within the book is just as scary if not scarier so readers beware!

3.) If You Could Go Trick-or-Treating With Any Author, Who Would You Pick? 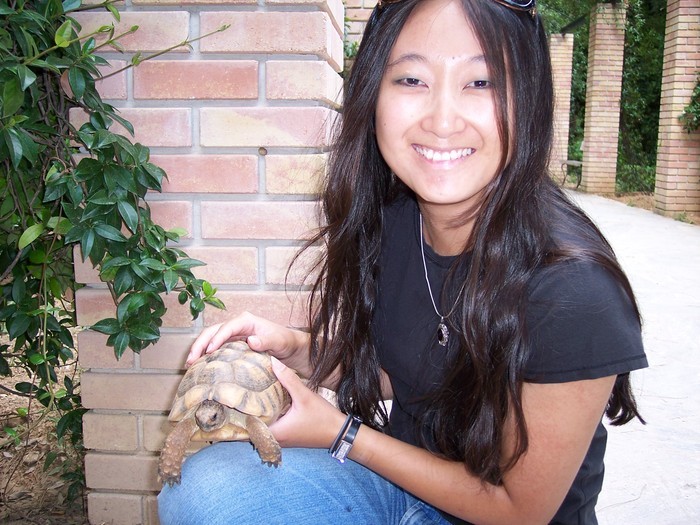 Kendare Blake, she wrote “Anna Dressed in Blood” and after reading that I have come to the terms that she is a horror writing goddess and I would therefore LOVE to run around on Halloween with her!

4.) If You Could Dress Up As Any Bookish Character For Halloween, Who Would You Be?

Eowyn from “The Lord of the Rings” because she’s a total badass, ’nuff said. This way I can run around pulling my helmet off yelling “I am no man!” and that’ll be great.

5.) If You Could Find Anything (From Any Book) In Your Trick-or-Treat Stash, What Would You Hope To Find? 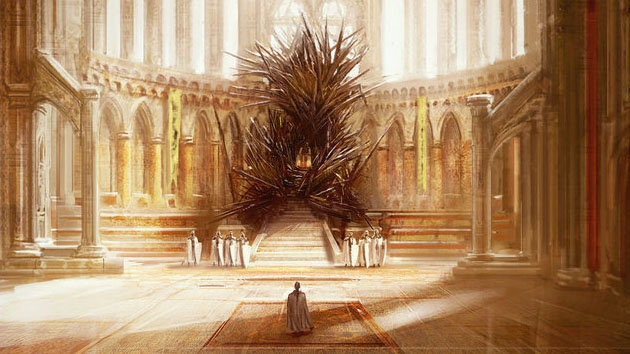 Am I allowed to assume my Trick-or-Treat bag is bottomless like Mary Poppins’ bag? If so I want the Iron Throne from “A Song of Ice and Fire” so I can be the One True Queen of Westeros. We’re talking about the REAL Iron Throne here, you know the one that’s huge and made out of thousands of swords, NOT that little piddly shit that passes for it on the TV show.

And if I have to pick something that will realistically fit into a Trick-or-Treat bag I’m going to go with a dragon egg, at least one. That way I will have a dragon in which I will TAKE the Iron Throne and be the One True Queen of Westeros.

Either way I’m going to be queen.

6.) In What Fictional World Would You Like To Go Trick-or-Treating?

The Harry Potter Universe. I’m not sure if anyone actually goes Trick-or-Treating in this world but I’ll definitely settle for eating at the Halloween feast in the Great Hall.

7.) What Book Villain Would You Not Like To Meet Alone In A Dark Alley On Halloween?

The Dark Lord, and since Voldemort AND Sauron both have that title I’m just going to go with both. I don’t want to meet ANY Dark Lord in an alley on Halloween.

8.) Would You Rather Dress Up As A Vampire, Zombie, Werewolf, or Shadowhunter?

A vampire I guess, I wouldn’t really be interested as dressing up as any of those ESPECIALLY not a Shadowhunter…..don’t even get me started on those guys but I’d go with Rose Hathaway from the Vampire Academy series. Yes technically she’s a dhampir but we won’t go into those details.

9.) Pick A Candy (Just One) From Harry Potter That You Would Love To Find In Your Stash?

Fizzing Whizbees, I don’t have a reason really. They look cool, they’d probably taste awesome, and if they’re the REAL magical Harry Potter kind I’d get to float a little bit.

10.) What Is Your Favorite Halloween Candy?

These delicious bastards! I also really enjoy candy corn but I wanted to go with something I love equally as much that’s not as popular.

That about wraps it up everybody, so if you’re looking to do an awesome Halloween tag before this Saturday feel free to do this one! I tag you. Make sure to credit Michelle over at Book Adventures if you do!