Just a post about October’s book releases, I know it’s late but hey at least it’s here. Maybe you’ll find a book to add that you didn’t know about! Usually I’ll add my own opinions on the books and do honorable mentions but this time around (since October is passed) I’m just listing a bunch with each synopsis!

These are listed by release date and each title is also linked to their Goodreads page if you’d like to add them!

END_OF_DOCUMENT_TOKEN_TO_BE_REPLACED

You guys know the drill: new month = new releases! This month actually has a TON of new books coming out and I’m pumped for a lot of them! I will be linking the titles to their Goodreads pages as well as doing a couple “honorable mentions” of books that are releasing but don’t interest me as much as the rest, at the end of the post too.

I actually already read and reviewed this one (which you can check out here) and thought it was a lot of fun and full of thrills! There are some seriously mind blowing plot twists and with the “psychic readings” it makes for a perfect Halloween read for those of you who don’t enjoy horror!

Another one I have an ARC of but sounds interesting! A group of teenagers get seperated on a class trip in an old, creepy house that was cursed by its owner and discover the truth of the house is much more horrifying.

I’m currently reading my ARC of this right now and while the world and characters take some getting used too (major info dumping) it’s fantastic so far. It’s about a pair of women whose births were prophesied fighting demons, the world is also super interesting too!

During a festival the people of Hawthorn start going missing and someone may be using forbidden magic, it’s up to Jemmie and Crow, the leader of the magic using motorcycle gang, to work together and find their missing loved ones.

How can you go wrong with magical motorcycle gangs?

For a century the Nomeolvide women have tended the Le Pradera estate but if they fall too deeply in love the person will disappear. After years of vanishings a strange boy appears in the gardens with no knowledge of who he is other than his name and Estrella helps him piece together his past.

Lots of people are raving about this one already and it’s GLBT!

The Last Namsara by Kristin Ciccarelli

Basically we have a girl who is a dragon-slayer and she must kill the most powerful dragon in the kingdom in exchange for knowledge about her true nature.

Kind of a in depth and slightly confusing synopsis so I summed it up in the most basic way ever! Sorry! But hey at least there’s dragons!

Leo and the twins, Orion and Libra, have been born and raised on Earth’s Moon 2 and after a life of running drills and being prepared by the astronauts they’re finally taking a trip to Earth.

Kind of sounds really interesting and I’m curious to see what’s so “dangerous” about going to Earth in this universe!

This is set in a near future world where the British Empire was preserved and royal marriages are arranged by genetic matchmaking. Before she is married off, Margaret gets the chance to lay low for a summer vacation and meets some new friends. They discover that they may have the chance to change the world.

Sorry, yet another slightly confusing synopsis that I did a shoddy job of summarizing. It sounds pretty unique though! 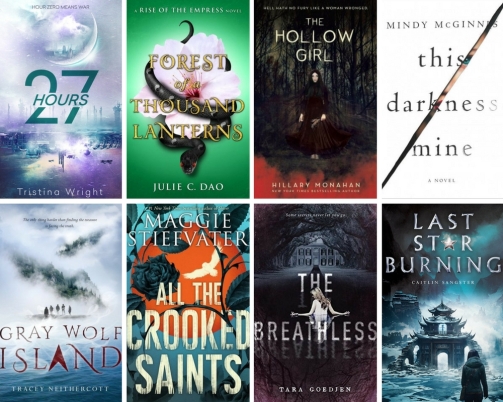 This science fiction book focuses around several different characters who must fight together to save their homes by stopping the war between humans and monsters in one 27 hour night.

Once again, I condensed this quite a bit but there’s a diverse cast featuring GLBT characters and who doesn’t love the sound of humans vs. monsters in space?!

“An East Asian fantasy reimagining of The Evil Queen legend about one peasant girl’s quest to become Empress–and the darkness she must unleash to achieve her destiny.”

That’s a good little summary from the Goodreads page, I’m ALL for an Evil Queen retelling especially one with gods and eating hearts.

I read and reviewed my ARC already (which you can read here) and this book was fantastic! It’s full of dark witchcraft and revenge, I highly recommend checking it out!

This Darkness Mine by Mindy McGinnis

Sasha has everything working out for her: first chair clarinet, top of her class, the perfect boyfriend, and she has her way to being a star musician free and clear. However, a new guy shows up and she finds herself drawn to him and missing his touch even though she’s never met him. She then discovers she absorbed her twin in the womb which may explain her missing memories……

This book sounds super creepy in a suspenseful way and I have an ARC so I’m hoping it is amazing!

Right before her sister died she asked Ruby to find the treasure on Gray Wolf Island, armed with a treasure map and a few friends who are all touched by magic. However, each friend is keeping a secret and they must reveal it in order to reach the treasure.

I’m all for a book with treasure involved, I have an ARC I’m hoping to get to.

All the Crooked Saints by Maggie Stiefvater

Three cousins perform miracles in a town called Bicho Raro and pilgrims come from all over to experience them. The miracles, however, never come the way you expect them to.

All I have to say is I’m here for Maggie Stiefvater.

The Breathless by Tara Goedjen

No one knows what happened when Roxanne Cole’s body was found on the beach and her boyfriend, Cage, took off that night and disappeared. A year after Ro’s death Cage shows back up again at the house asking where she is and Mae, Ro’s sister, but something isn’t right and Mae is going to find out what.

Sounds like it’s full of family secrets and maybe even a creepy house with a will of its own.

Sev is branded a criminal for being the daughter of the woman who betrayed the entire nation. When the government blames her for a bombing she must either escape the city or be executed.

I really liked the way the synopsis already leaves you with questions you wanted answered! Hopefully it’s as good as it sounds!

Hanne is a berserker and flies into a killing state when the people she loves are threatened. Her and her siblings must leave Norway for the American frontier before they are brought to justice. A young cowboy agrees to help them on their journey to their Uncle who may be able to teach Hanne to control her ability.

Okay, okay, okay HOLD UP! Vikings (not really but kind of, since…Norwegian berserkers and stuff) AND cowboys? Sign me the hell up!

The Nowhere Girls by Amy Reed

Three misfits come together to avenge the rape of a fellow classmate and in the process trigger a change in the misogynist culture at their high school transforming the lives of everyone around them in this searing and timely story.

This is the Goodreads synopsis as well and I think it really sums up the story well, honestly this book sounds so freaking good and the cover is beautiful.

Basically this is part of the Gone series and takes place four years after the events of the other six books! I am beyond pumped to get back into this world because I loved the Gone series.

Justyce is at the top of his class and on his way to the Ivy League, but when he and his friend go for a drive with their music cranked up and an off duty white cop is enraged, and shots are fired. Then in the media fallout it’s Justyce who is being attacked.

This sounds pretty similar to “The Hate U Give” which was amazing so I of course am excited to read this one as well!

The Glass Spare by Lauren DeStefano

The only daughter of the king finds out she has the ability to turn people to gemstone with only her touch. After a tragedy she must leave in order to find a cure and comes across a cursed prince who wants to use her power for his own agenda.

I was really excited for this one but the more I look at it the more it sounds like a cliche YA fantasy, I hope that isn’t the case though.

The Afterlife of Holly Chase by Cynthia Hand

Holly Chase was visited 5 years ago on Christmas eve by the ghosts of Christmas past, present, and future. They tried to end her selfish spoiled ways, she didn’t listen, and now she’s dead. Holly now works Project Scrooge as the new ghost of Christmas Past and she has to watch as everyone ages and moves on without her but this year something is about to change.

Okay, all I have to say is that a Christmas Carol retelling (of a sort) sounds so unique and I am all for it!

Beasts Made of Night by Tochi Onyebuchi

A Nigerian influence fantasy where corrupt mages can extract sin from sinners in the form of a sin beast. Taj is indentured to the mages as an aki, someone who slays the sin beasts.

Sounds super unique but I haven’t heard too many great things the closer we get to the release date! Hopefully it’s as interesting as it sounds!

The Empress (The Diabolic #2) by S.J. Kincaid

As you all may know by now I freaking LOVED “The Diabolic” and while I was a bit upset that it wasn’t a standalone like it was supposed to be I am ready to dive back into that world with those characters! I did get an ARC of this as well so I’m excited!

The Wicker King by K. Ancrum

August learns that his friend, Jack, is showing signs of degenerative hallucinatory disorder and is determined to help him cope. Jack has long, vivid visions of a fantasy world layered over our own and is ruled by the Wicker King. Jack then leads them on a quest to fulfill a dark prophesy and even August begins to question what’s real and what’s not.

This sounds remotely creepy and I do love myself a good YA psychological thriller!

(These are just a few books I know that are being released but I either am not caught up with the series or I’m not that interested in the book but know you may be!)

What are some October releases I didn’t include that you’re looking forward to?