Sasha Stone knows her place—first-chair clarinet, top of her class, and at the side of her oxford-wearing boyfriend. She’s worked her entire life to ensure that her path to Oberlin Conservatory as a star musician is perfectly paved.

But suddenly there’s a fork in the road, in the shape of Isaac Harver. Her body shifts toward him when he walks by, her skin misses his touch even though she’s never known it, and she relishes the smell of him—smoke, beer, and trouble—all the things she’s avoided to get where she is. Even worse, every time he’s near Sasha, her heart stops, literally. Why does he know her so well—too well—and she doesn’t know him at all?

Sasha discovers that her by-the-book life began by ending another’s: the twin sister she absorbed in the womb. But that doesn’t explain the gaps of missing time in her practice schedule or the memories she has of things she certainly never did with Isaac. As Sasha loses her much-cherished control, her life—and heart—become more entangled with Isaac. Armed with the knowledge that her heart might not be hers alone, Sasha must decide what she’s willing to do—and who she’s willing to hurt—to take it back.

**** Big thank you to Katherine Tegen Books for sending me a copy in exchange for an honest review! ****

I really don’t know how to rate this book because while it was still interesting I’m left feeling a little disappointed with it. I also just had some very personal issues with some of the content (which I will go into detail about below) so I’m left giving it a rating of 2.5 because I neither strongly liked or strongly disliked this book.

I’d like to first go out on a limb and say this book really, really wasn’t what I was expecting at all. I was expecting something with a little more suspense and thriller style twists to it, but what I got was a pretty predictable plot line and a very unlikable main character. There is a bit of a twist half way through and the story takes a turn but it wasn’t very shocking and I really disliked the second half of the story because it was super slow.

The pacing was pretty even throughout the beginning of the book and I kept reading wanting to know more about Sasha’s situation but as I mentioned previously there’s a twist half way through that made the story take a bit of a dive as far as pacing goes. I thought it was considerably slower and even pretty boring all the way through to the end.

There’s hardly any plot twists which was really disappointing for a mystery/thriller and the big plot twist that makes up the entire story is very predictable and not at all a surprise. Also disappointing. I was expecting there to be a lot more shockers than that. PLUS a lot of stuff is given away in the synopsis! I hate that!

I do really like unreliable narrators and in this case the story was pretty good since Sasha is a very unreliable narrator. She actually makes the story very dark as her character flaws come to the light and we don’t know what to believe. That’s part of why I enjoyed the story and was able to finish it.

However, as much as I love an unreliable narrator and a dark plot the book actually got really, really…….weird. Usually I love weird but with this I just felt super confused and I finished the book thinking “What the hell did I just read?” and not really in a good way. I enjoy a good open ended book but with this ending I felt like a bit more explanation or plot development would have done it a lot of good. The only comprehensible thought I have on the ending of this book is it’s WEIRD.

The writing was really great though and I found it to be extremely readable, honestly it was probably one of the reasons I was able to read this through to the end. I will definitely be checking out McGinnis’ other books just for more of her writing.

Last but not least I’d like to address one of my biggest issues with this book which also happens to be a personal issue of mine. This may or may not affect your reading of this book but I’d like to throw it out there and that has to do with the trigger warning I listed at the start of this review:

I have anxiety and a big part of my anxiety is linked to my health (i.e. hypochondria) and therefore I cannot stand reading about or listening to in depth descriptions of health issues or medical procedures because it triggers my anxiety. “This Darkness Mine” really goes into great description of these things and it becomes a major part of the plot, if I had known this ahead of time I probably wouldn’t have wanted to read the book since reading through this triggered my anxiety to the point where I had to stop reading at times. This is a big part of why I didn’t rate this book higher, it’s a personal issue I understand but one I wanted to warn others about as well.

The characters in this book are another drawback for me, while I liked that Sasha (the MC) was an unreliable narrator making the story a bit more interesting, she was extremely unlikable. We’re talking a downright crappy person and it was frustrating to read through and listen to her say rude things to and about people. I understand that these things were Sasha’s character flaws and were there to drive a point home about her and none of these things were portrayed in a positive way. However, this didn’t make me enjoy her any more.

There were actually quite a few side characters that I liked such as Sasha’s friend Brooke and Isaac who is the love interest. I thought Brooke was hilarious and her bits were worth reading and Isaac was actually such a sweetheart and I feel terrible about some of the things that happen to him.

While I really liked Isaac and I wanted him to be happy I just felt that Sasha treated him like crap, plain and simple. It definitely isn’t a healthy or positive relationship but McGinnis doesn’t glorify this at all which I liked. Neither Isaac nor Sasha are physically or verbally abusive to one another but I just feel like it’s still unhealthy because of the way Sasha negatively treats him at times.

As I said there are a lot of mixed feelings on this book because while some things worked a lot of them didn’t for me.

I’d recommend reading this only if you like unreliable/unlikable main characters, strange plots with open endings, and if you aren’t triggered by anything I mentioned in the warnings. Otherwise I’d steer clear of this one.

This month’s TBR makes me think I really, really should have participated in ARC August….because these are ALL ARCs. I have got a TON of reading to do this month! I’m hoping I can get out of my mini reading slump here and power through all of these books because I really am excited to read all of them. 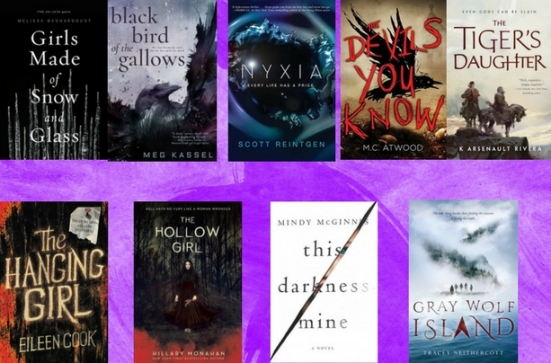 Girls Made of Snow & Glass by Melissa Bashardoust

This is a Snow White retelling that I’m currently trying to power through, it’s very interesting but the pacing is extremely uneven and I’m stuck in a super slow part at the moment.

I feel terrible I didn’t get to this one last month like I was supposed to. This may or may not be my cup of tea since it seems very romance-focused but hopefully the whole “harbinger of death” thing will keep things interesting!

This is a sci-fi novel about a character who is recruited by a corporation to leave Earth and mine a new valuable resource on another planet. However, this planet was kept secret and that’s not all the corporation is hiding. It sounds pretty exciting so I’m hoping it proves worth while!

The Devils You Know by M.C. Atwood

A group of seniors travel to Boulder House for their senior trip but the house is said to be cursed. When the characters get separated from the rest of their group they realize the truth is much more horrifying. Of course I’m always up for some YA horror, hopefully it’s thrilling!

Two young female warriors, whose births were prophesied, must save the world from demons. Sounds badass, period.

Skye has been faking tarot card readings for a while but when the police ask her to help find a missing girl she already has some inside information. The kidnapping was planned and she was going to get a cut but things have taken a dark turn and she must find them before it’s too late. This sounds both spooky and thrilling so hopefully it will be a great read!

Bethan is an apprentice green healer in a clan of Welsh-Romanies, however, all isn’t well as the son of the chieftain and his friends brutally assault both Bethan and her friend Martyn. Bethan wants to bring Martyn back from death’s door but is told the price of the magic required is gruesome. When the boys who attacked her don’t come forward and apologize she knows where to collect those ingredients…..

This sounds super creepy and I’m really excited to get to it, I loooove YA horror!

This Darkness Mine by Mindy McGinnis

Sasha has everything working out for her: first chair clarinet, top of her class, the perfect boyfriend, and she has her way to being a star musician free and clear. However, a new guy shows up and she finds herself drawn to him and missing his touch even though she’s never met him. She then discovers she absorbed her twin in the womb which may explain her missing memories……

This is another books that sounds strangely creepy yet very mysterious and thrilling, I’m hoping it pans out!

Right before her sister died she asked Ruby to find the treasure on Gray Wolf Island, armed with a treasure map and a few friends who are all touched by magic. However, each friend is keeping a secret and they must reveal it in order to reach the treasure.

Is it just me or are there not enough treasure themed books? This sounds really unique and compelling!