I don’t know why I initially added this book but with the upcoming movie (that looks badass) I’m going to keep it because I think, as a geek, that it’d be right up my alley.

This book has loads of glowing reviews and I’m sure I’d enjoy it if I read it but I just don’t have a whole lot of interest in it at the moment. And I don’t really want to gum up my TBR with books I’m “meh” about anymore.

While the premise for this book sounds great (Forest of the Dead where criminals are exiled and a team of twin sisters have to go put down all the angry souls of the damned there) I’ve heard it’s extremely slow and boring, and I just don’t have the patience for slow books that promise cool/badass things and don’t deliver.

I think I’ve said this before but I intend on keeping pretty much all of the books by Cat Winters on my TBR, she’s great.

I love horses, always have, and I also like Steifvater’s writing so really it’s the perfect pair for me.

I really like the sound of this graphic novel, humans have to live in the depths of the ocean to escape the sun’s radiation and also set out to see if they can’t find a new place to live in space. Kind of reminds me of Bioshock.

While I am all for getting my hands on Phantom of the Opera retellings, this one just doesn’t sound like it’s for me. It seems really slow and boring and I just don’t know if it’s a book for me. 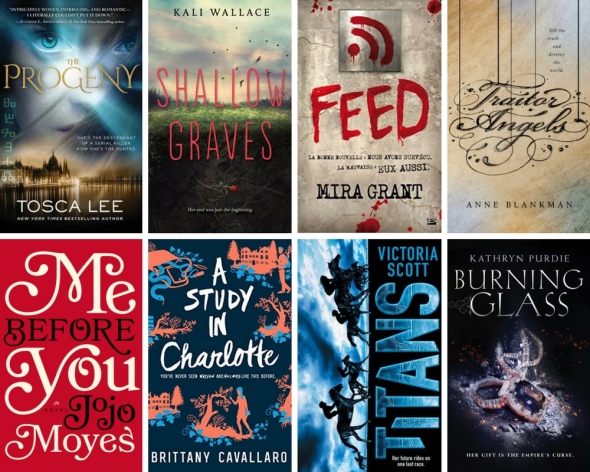 This book is about one of the descendants of serial killer Elizabeth Bathory “Blood Countess” and a secret society that’s trying to kill her for the sole purpose that she is the descendant of a serial killer. While I admit I have a morbid curiosity when it comes to things involving serial killers and that’s why I wanted to read this book, I’ve heard that it’s actually pretty boring and messy. Like the secret society only wants to kill her because of who her ancestor was with no other explanation. I don’t like that.

I’m excited to give this one a try since I think it seems really underrated. It’s about a girl who wakes up in a grave, her heartbeat comes and goes, she can sense people who are hiding murderous secrets, and there’s a secret society looking for creatures like her. I think it sounds great!

I love zombies and I love zombie books, however, I’ve heard this one can be a bit slow and drags on. Also if I’m reading a book about zombies I like to at least see some zombies and not at the end of the book, which I’ve heard complaints about the lack of zombies.

I don’t know why I actually added this? I think because it was a new releases at the time. Usually I don’t enjoy historical fiction and especially ones where the plot sounds cliched and full of more cliched romance.

I’m all for a Sherlock Holmes retelling especially one where Sherlock is a female. I actually read maybe half of this book and had to return it to the library but what I read was pretty good.

Maybe one day I’ll actually read my copy I “just had to have”.

This just sounded super cliched and like it’s nothing new.

I only added this because Fae, but there seem to be a ton of DNF reviews for this book so I just don’t really want to waste my time with it anymore.

Comparisons to Firefly and I read a sample of it already and liked what I read, so I’m definitely keeping it. I love sci-fi too.

The third book in the Monstrumologist series and I do plan on continuing with it.

A fantasy where the the princess ends up falling for the sister of her betrothed. I’m pretty much here for the F/F romance.

Another YA fantasy that doesn’t sound like anything new or unique, plus I can’t stand romance focused plots and that’s the impression I get from this one.

While I do appreciate that there’s no romance (I read this in a review) in this book, I still think the plot kind of sounds pretty bland and there isn’t much information given as to what the book is actually about.

The title alone is awesome, plus there’s great reviews, and the plot with a badass queen who must protect humankind from he malevolent spirits of the land.

I liked the concept of everyone living on floating islands and that the abandoned Earth is full of cool monsters. However, I heard the protagonist really isn’t likable and that she’s saved by a boy. I don’t like whiny heroines that need to rely on a male character to do all the work and save them all the time.