This week’s theme is series we have been meaning to start and haven’t yet! I am notorious for starting series and usually never finishing them so there really weren’t that many series on my TBR that I haven’t started at all, but here are the few!

These aren’t in any specific order either!

10.) The Mistborn Series by Brandon Sanderson

I actually own the box set of the trilogy but just haven’t gotten to it yet. As a huge fantasy fan reading this seems to be an absolute must and I’m definitely excited to get to it, or really any Brandon Sanderson book!

9.) The Diviners Series by Libba Bray 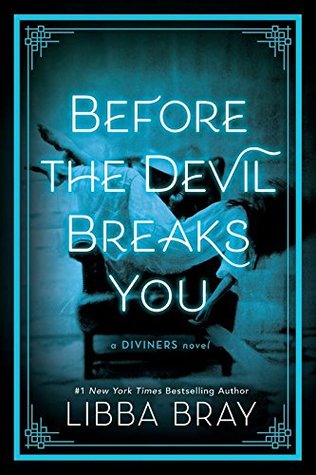 I’ve owned the first book for a while and just haven’t gotten to it yet, I am definitely a huge fan of creepy and spooky books so I’m hoping to get to it this October!

Why haven’t I read this?! I bought the first book when it came out and still haven’t read it! I know I’m a terrible person, I will read it eventually especially since it’s such a popular series and was being marketed as a sort of YA Game of Thrones.

7.) The A Court of Thorns and Roses Series by Sarah J. Maas

Sarah J. Maas and her books are HUGELY hyped and while I did give the first book in her other series “Throne of Glass” a go , I also want to see what the big deal is with this series as well. I may turn out to be that person who just doesn’t click with her writing.

6.) The Heroes of Olympus Series by Rick Riordan

I read and adored the Percy Jackson series but just haven’t gotten around to this one yet. I know, I know shame on me! I have a lot of catching up to do as far as Riordan’s series go though, but I definitely need to binge this series soon!

5.) The Firebird Trilogy by Claudia Gray

I actually wasn’t too interested in this series right away since I thought, for some dumb reason, this was a contemporary series. It’s actually sci-fi and once I found that out and actually read the premise I was sold!

4.) The Magicians Trilogy by Lev Grossman

I actually wasn’t SUPER interested in this trilogy right away but then I started watching the SyFy show on Netflix and could not get enough! No I haven’t finished season one yet but I’m in love and would definitely love to read this series now!

3.) The Abhorsen Trilogy by Garth Nix

Not really sure why I want to read this series so much but the premise sounds like it promises a badass heroine and it seems to be another staple series in fantasy so I need to read it!

2.) The School For Good and Evil Trilogy by Soman Chainani

I know this is a middle grade series but honestly it sounds so good! There are schools for training “good” princes and princesses and also to train the “evil” villains, what about this doesn’t sound interesting? I’m definitely excited to give it a try!

1.) The Insignia Trilogy by S.J. Kincaid

I could always use more YA sci-fi on my TBR and after loving S.J. Kincaid’s other novel “The Diabolic” I really wanted to give her other books a try so I bought the first book in this series!

What are some series you’ve been meaning to start?

Have you read any of these series/trilogies? What did you think?