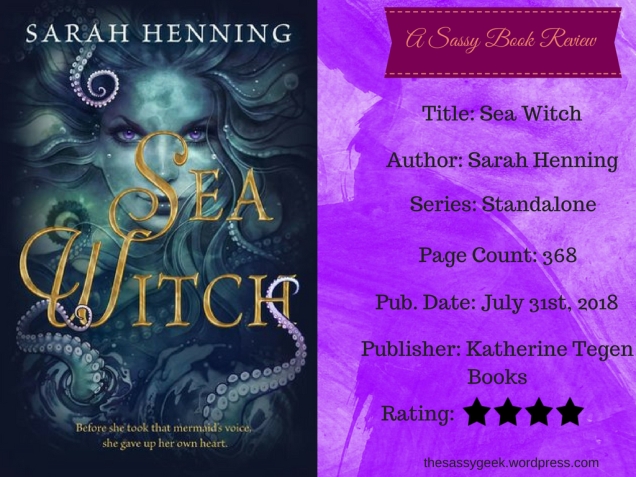 Everyone knows what happens in the end.
A mermaid, a prince, a true love’s kiss.
But before that young siren’s tale, there were three friends.
One feared, one royal, and one already dead.

Ever since her best friend, Anna, drowned, Evie has been an outcast in her small fishing town. A freak. A curse. A witch.

A girl with an uncanny resemblance to Anna appears offshore and, though the girl denies it, Evie is convinced that her best friend actually survived. That her own magic wasn’t so powerless after all. And, as the two girls catch the eyes—and hearts—of two charming princes, Evie believes that she might finally have a chance at her own happily ever after.

But her new friend has secrets of her own. She can’t stay in Havnestad, or on two legs, unless Evie finds a way to help her. Now Evie will do anything to save her friend’s humanity, along with her prince’s heart—harnessing the power of her magic, her ocean, and her love until she discovers, too late, the truth of her bargain.

The rise of Hans Christian Andersen’s iconic villainess is a heart-wrenching story of friendship, betrayal, and a girl pushed beyond her limits—to become a monster.

This is such a unique a book and I’m not quite sure how to even review it, but it was a fantastic read and I really enjoyed it! This felt like so much more than a ‘Little Mermaid’ with fantastic character development and an overall magical atmosphere, but at the same time it’s one of the BEST ‘Little Mermaid’ retellings I’ve read and probably will read.

First of all I’d like to say this book wasn’t exactly what I expected and it probably won’t be what a lot of other readers will expect either. While this is still an origin story for the sea witch ( a lot of us know her as Ursula, of course) from ‘The Little Mermaid’ it doesn’t feel like the focus of the story a lot of the time. There’s a big focus on friendship and social status as the story focuses on the main characters who are from different “classes” but are determined to remain friends despite this. I also wasn’t expecting such a historical fiction feel either, which was actually really nice, the setting is 19th century Denmark in the Oresund strait. There’s mention of real historical figures as well, such as King Christian IV who put many “witches” to death and this also helps to set the atmosphere of the story since one of our MCs is in fact a witch and everyone has a deeply seeded fear of them.

The story revolves around three best friends: Nik, the crown prince, Anna, a noble girl who died when they were younger, and Evie/Evelyn, who is a witch and whose POV the story is told from. Nik and Evie are best friends and as I mentioned already a lot of the story focuses on their social status difference and how despite what others think they remain friends. When Nik is saved by a mysterious girl who strongly resembles their dead friend, Anna, Evie is drawn into a friendship and mission to help this girl.

This is a very slowly paced book but I thought it was intriguing enough to keep me reading despite the slow pacing. Right when I thought I had the story figured out I was thrown for a loop about half way through, and I was definitely surprised! I would say definitely stick it out until the end even if you find the pacing hard to deal with, the ending is very much worth it all! Although one of the twists was a little predictable for me.

Another thing I really enjoyed was the writing, it’s very beautiful and atmospheric.

This is a slightly more character driven book and overall I thought the characters were fantastic. Everyone was very complex and well developed in my opinion.

Evie is a very strong character and I admired her determination and loyalty, no matter what others whisper about her she will not give up her friendship with Nik. She also spends a lot of time “saving” Nik from his various royal duties! Nik is also about the sweetest little thing, he’s a hopeless romantic and I found this to be very endearing! I didn’t have too much of an opinion on Annemette (the mysterious girl who rescues Nik) and I hated Iker, a cousin of Nik’s and a crown prince as well. I mean it, there was nothing likable about the “playboy prince” Iker and I think I liked the antagonist better which is really saying something.

There are few side characters so there isn’t much to talk about there but Evie’s aunt (Tante) Hansa is one of the more interesting ones since she is a witch as well.

There is quite a bit of romance happening in “Sea Witch” some of which I can discuss and some of which I cannot due to spoilers. However, there were no tropes here except perhaps forbidden romance which is one of my faves! There’s a lot going on as far as the romantic plot goes and it gets a little tangled up throughout but by the end I was happy (and sad) with how things ended up. I will say though that I was always suspicious of Iker and Evie’s relationship since he’s known as a playboy and I just didn’t like him at all. I very much shipped another relationship but I can’t talk about it because I don’t want to spoil it!

Overall I definitely recommend “Sea Witch” as a very well done and beautifully written retelling. Although I will say it IS very slow to start and if you can handle that the ending is very much worth the read! Hopefully this book will find the audience it deserves!