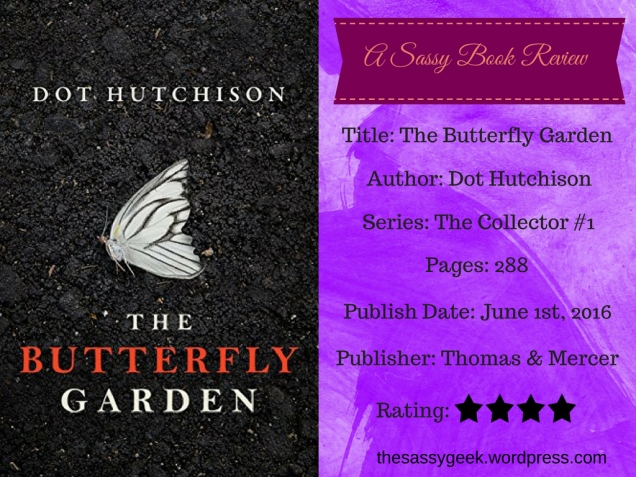 Near an isolated mansion lies a beautiful garden.

In this garden grow luscious flowers, shady trees…and a collection of precious “butterflies”—young women who have been kidnapped and intricately tattooed to resemble their namesakes. Overseeing it all is the Gardener, a brutal, twisted man obsessed with capturing and preserving his lovely specimens.

When the garden is discovered, a survivor is brought in for questioning. FBI agents Victor Hanoverian and Brandon Eddison are tasked with piecing together one of the most stomach-churning cases of their careers. But the girl, known only as Maya, proves to be a puzzle herself.

As her story twists and turns, slowly shedding light on life in the Butterfly Garden, Maya reveals old grudges, new saviors, and horrific tales of a man who’d go to any length to hold beauty captive. But the more she shares, the more the agents have to wonder what she’s still hiding…

This is kind of a hard book for me to review considering the subject matter and how does one say that a book was completely engrossing despite the twisted and sick happenings? Because that’s how reading “The Butterfly Garden” was for me, engrossing and engaging despite how messed up it all was. This is a book that won’t be for anyone but if you can stomach the content warnings I listed then it’s very much worth the read.

“The Butterfly Garden” is a character driven story and one that had me very invested throughout my reading. Overall the pacing is very even but I will say that the first bit of the book is the most shocking and after that I just wasn’t all that surprised anymore. Everything was already revealed about The Garden pretty much straight away, sure not EVERYTHING but like I said towards the end I wasn’t too surprised by anything anymore.

I don’t really want to discuss too much of the story since, ya know, spoilers but it’s definitely a very dark, graphic, and twisted book. The story is told by one of the surviving girls (called Butterflies who were abducted by a man called The Gardner) to two FBI agents, half the time we are reading from a 3rd person POV and then a 1st person POV when, Maya, is telling her story. I didn’t find this to be too confusing or anything and actually really liked this sort of unique perspective and way of telling the story. The writing is also really engaging, it did a great job of holding my attention as well as making a very dark story seem light and beautiful at times.

I really liked how each agent had their own kind of personal stake in the case, it made their characters feel all the more real and complex. It also helped me get an understanding for their lines of questioning or even how they responded to certain aspects of Maya’s story.

The only thing I didn’t really like was the ending. Yep, my one biggest complaint. Why? It made zero sense to me, I still feel like I don’t get it. Everything felt really inconclusive to me with that added “twist” at the end, what was the point of it? I won’t gripe about it too much more since, once again, I don’t want to spoil anything.

As I’ve already stated a few times “The Butterfly Garden” is a character driven narrative and the characters did impress. There were no insignificant characters introduced, everyone had a story and that was something I really liked. Each victim was individualized and had their own unique quirks and personalities that were explored, even though they may not have been as prominent as some of the other characters.

From the FBI agents investigating the case to the Butterflies and their tormentors, everyone was very complex and well done. I really can’t even begin to describe how impressive the characterization in this book was.

If you’re looking for a dark, twisted thriller with fantastically complex characters then I definitely recommend checking out “The Butterfly Garden”. It’s an interesting book and worth the read if you can stomach some of the graphic content.

4 thoughts on “Book Review: The Butterfly Garden (The Collector #1) by Dot Hutchison”