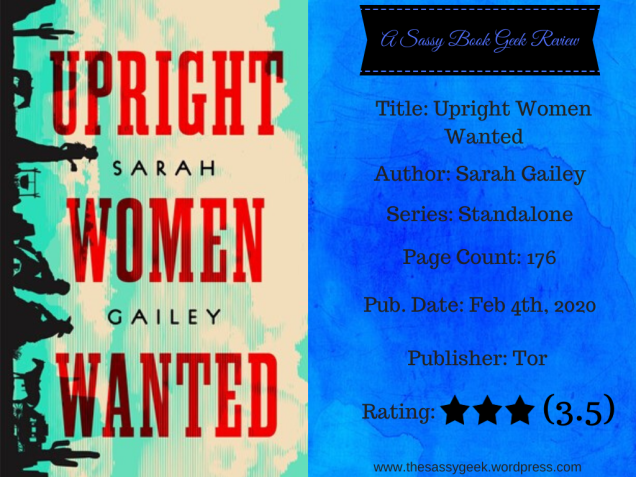 “That girl’s got more wrong notions than a barn owl’s got mean looks.”

The future American Southwest is full of bandits, fascists, and queer librarian spies on horseback trying to do the right thing.

The entire premise of this novella is just amazing: queer librarian spies on horseback? Yes, please! Sarah Gailey really delivered with this one too, it’s a quick and enjoyable read. It was a great setting, with diverse characters but it was a teeny bit slow for my tastes. Overall a great little read though.

Overall the plot is pretty straightforward especially since this is a novella so nothing is too terribly complex. The setting seems to be a future American Southwest but one where we have gone backwards with certain technology as it’s very much a “western”. There aren’t cars anymore but we have horses and guns! There is a bit of world building but it really isn’t expanded on a whole lot so I was left confused as to certain aspects of the world. I understood that some sort of regime came into place where only “approved materials” were distributed to the public, hence the Librarians of the story, and certain technologies weren’t available to everyone: latex gloves, generators, diesel fuel, etc. I just wish there had been a tiny bit more explaining behind this.

As well as executing people for possessing “unapproved materials” (books, writings, film, etc) they also punish people for being LGTBQ+. People trying to hide their romantic interests as well as genders are a very central plot point in this book. The Librarians help these people escape the State and smuggle various items as well. Essentially the Librarians are rebel badasses and they’re smart about it. I cannot express how amazing this concept was, I loved it.

There are a few surprising twists along the way but I found the pacing to be a bit slow. I had to trudge along at certain points because there’s a lot of tedious traveling at times. However, the ending was so feel good and I really, really loved it! I mean I’m always for a happy ending and this very much was one, I feel!

This is a more character driven novella featuring a LGTBQ+ cast. We have Esther, the protagonist, who was in love with her friend Beatriz and is now on the run. She honestly develops so, so well throughout the story and I was so proud of her by the end of it! She’s a bit more shy and has skill, though she is slow to admit that she’s good at anything. Esther is also a lesbian and develops the cutest most satisfying relationship by the end of the book, again, so proud of her.

Then we have Bet, the Head Librarian, and Leda the Assistant Librarian. They’re both in a relationship together as well  and are both lesbians. Both women were such badasses too, I adored them. Then we have Cye who is an apprentice Librarian, they are non-binary and are also a badass. Though Cye comes off a little rough they’re actually really sweet. ALSO this is own voices non-binary rep!

Honestly, I know I don’t have a lot of “negatives” about the book but it didn’t quite grasp me as much as I thought it would so I’m going with the 3.5 rating. It’s definitely an enjoyable novella with amazing rep and I highly recommend checking it out!

Links (Check it out on Goodreads or Order a Copy!):
Goodreads / Barnes & Noble / Book Depository / Amazon